Oracle Stock: ORCL is worth adding to your portfolio. Here’s why

The transformation of Oracle Corporation (NYSE: ORCL) from a software firm into a diversified cloud solutions provider accelerated in recent years aided by the mass adoption of digital technology across industries. While overcoming the slowdown in its legacy business, the new model enabled the company to become an industry leader with cloud-powered AI and machine-learning capabilities.

Oracle’s revenue growth has been impressive, but it is not necessarily consistent with the many M&A deals it completed in recent years. After adding Adi Insights and more recently software firm Cerner Corporation to its fold, the company is pursuing more acquisitions to grow its portfolio. The significance of the latest deal is that the management sees strong synergies from it, contributing handsomely to organic revenue growth and earnings.  According to the executives, Oracle hosts cloud regions in more countries and cities than Amazon Web Services and Microsoft Azure. Multi-cloud interoperability gives it a significant edge over others.

“Customers are already buying applications and cloud infrastructure from several different providers, including Microsoft, Amazon, Salesforce, Oracle, and others. Our job is to give our customers the ability to choose application and infrastructure technology from multiple clouds and then have those different clouds coexist and interoperate gracefully. Multi-cloud interoperability is an important step in the evolution of cloud computing.“

Over the years, Oracle’s stock has made stable gains reflecting positive investor sentiment, which helped it reach a market capitalization of more than $200 billion. Though the trend reversed in the second half of 2021 and ORCL pared a part of the gains even as the market suffered a major selloff, the impact on the stock was relatively modest. It is a value stock that generates decent per-share growth amid regular buybacks, and has often outperformed competitors and the broad market this year. 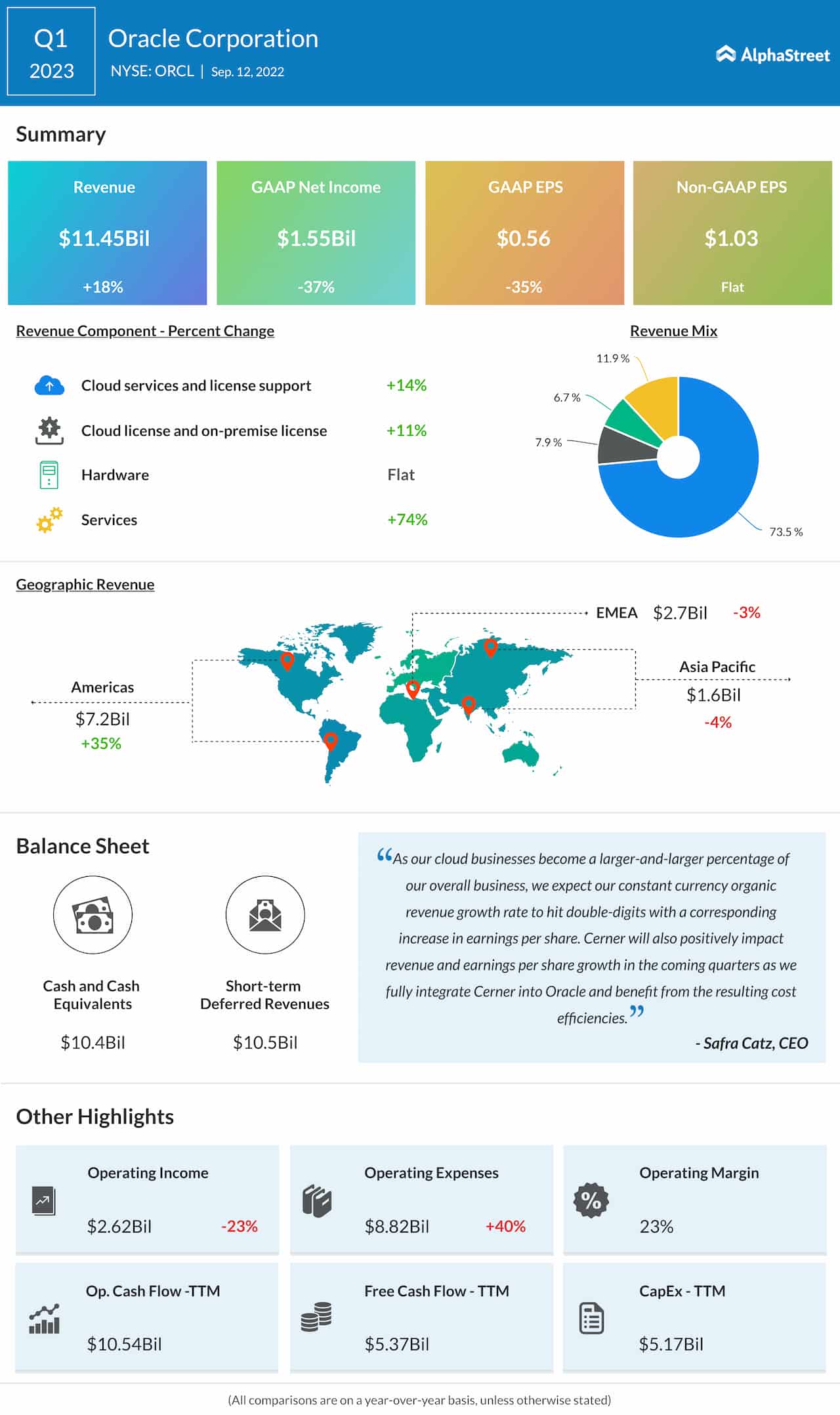 From the investment perspective, Oracle is unlikely to disappoint those looking to grow their portfolios on a long-term basis. The stock is cheap and it is likely to remain affordable in the near future. However, it is advisable to keep an eye on it until a more encouraging outlook emerges, thereby averting short-term risks. Right now, experts’ consensus rating is mixed, while the stock is expected to grow by a fifth in the next twelve months.

The fact that around 43% of the shares are owned by insiders – valued at $90 billion at the current price – is good news for shareholders as it underscores the company’s promising prospects. Also, the tech firm is an established dividend payer, returning cash to shareholders regularly for more than a decade.

Revenues climbed 18% to $11.5 billion in the August quarter, supported by contributions from the recently-acquired Cerner business. While the cloud business continues to be the main growth driver, the topline came in broadly in line with the consensus forecast. But the positive revenue performance failed to translate into profit growth – adjusted earnings stayed unchanged at $1.03 per share and missed the Street view. The bottom line came under pressure from a 40% increase in operating expenses, which is expected to improve in the coming quarters as the integration of Cerner brings cost efficiencies.

The stock got a major boost soon after the company reported quarterly results this week but soon retreated to the pre-earnings levels in the following session. ORCL closed the last session down 1% and lost further early Wednesday.