Optimism at record high as Salesforce heads towards Q4 earnings

If there is one tech stock that has bucked industry-wide weaknesses and snubbed tightening competition, its undeniably Salesforce (CRM). On the back of solid performance, the stock has gained over 40% in the trailing 52 weeks.

CRM stock is currently trading at an all-time high. Though some analysts have called the stock overvalued, the markets will be in no mood to pay heed to these comments if the fourth-quarter results, expected on March 4, spring another surprise.

The cloud company has a remarkable history of beating street consensus and is poised to do it once again. Wall Street expects earnings of 55 cents per share on revenues of $3.56 billion in Q4, up almost 25% from last year.

The top line will be benefited by Salesforce’s partnerships, including those with Amazon (AMZN) and Alphabet (GOOGL) in the international markets. The partnerships have helped the company improve its client base significantly. It may also be noted that only a third of its total revenues come from outside the US, suggesting the scope for more growth in the years to come.

Despite rivals Adobe (ADBE) and Microsoft (MSFT) putting up a good fight to take away market share, Salesforce has mostly remained unaffected. The acquisition of Mulesoft last year should also provide some fillip to the top line in Q4.

In the last reported quarter, Salesforce had projected revenue growth for fiscal 2020 in the range of 20% to 21%. If the company manages to raise this guidance, it should do more good to the stock than an earnings beat. 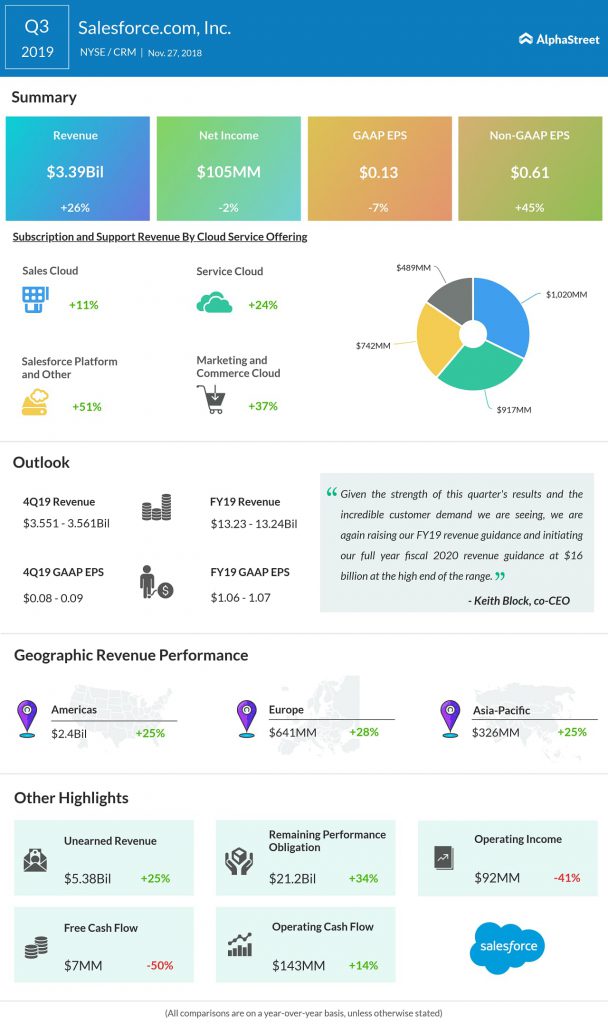 In Q3, Salesforce reported stellar results, sending the stock up over 5%. Earnings of $0.61 per share and revenue of $3.39 billion surpassed the street consensus. Analysts had expected earnings of $0.50 per share on revenues of $3.3 billion.