If there is an industry that explicitly manifests the health of the economy, it would be civil aviation. The theory is rooted in the correlation between people’s travel patterns and their fiscal well-being. When confronted with a cash crunch, the first thing most people do is to curtail their travel plans.

To be specific, most citizens embark on business and holiday trips when their spending power is relatively high.

There is every reason to believe that our society is going through such a phase. And, the traffic growth witnessed by the aviation industry is a testimony to the overall economic well-being. The majority of the airline companies are struggling to raise their capacity proportionate to the spurt in traffic, and as a result, flights are operating at full capacity. 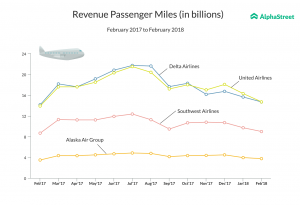 Encouraged by the robust traffic and shining economy, leading aviation firms have raised their revenue outlook for the current fiscal quarter.  In February, there was a marked increase in the number of passengers traveled on various airlines.

Southwest in its most recent financial statement said traffic, or revenue passenger miles, increased 3.5% year-on-year in February. Capacity, which is measured as available seat miles, moved up 1%, and there was a 200 basis points rise in load factor, a measure of the percentage of occupied seats per flight.

The muted capacity growth prompted the company to introduce more non-stop flights linking major US cities, with the first service scheduled to commence this autumn.

At United Continental, traffic and load factor grew 5.7% and 140 basis points respectively. And, there was a corresponding capacity growth of 3.8%.

Alaska Air Group (ALK) reported a 7.9% year-over-year gain in passenger traffic, and a 9% growth in capacity in February. Load factor was higher by 80 basis points compared to February 2017.