Apparel and footwear company VF Corp (VFC) saw its shares jump as much as 10% during pre-market trading on Wednesday after posting strong third-quarter results that surpassed expectations of the street.

Helped by solid demand in the Active, Outdoor and Work segments, revenue jumped 8% to $3.9 billion. Analysts had expected third quarter revenues of $3.87 billion.

Earnings on an adjusted basis soared 30% to $1.31 per share, smashing past the street projection of $1.09 per share. On a reported basis, the company earned $1.16 per share, compared to a loss of 23 cents per share last year. 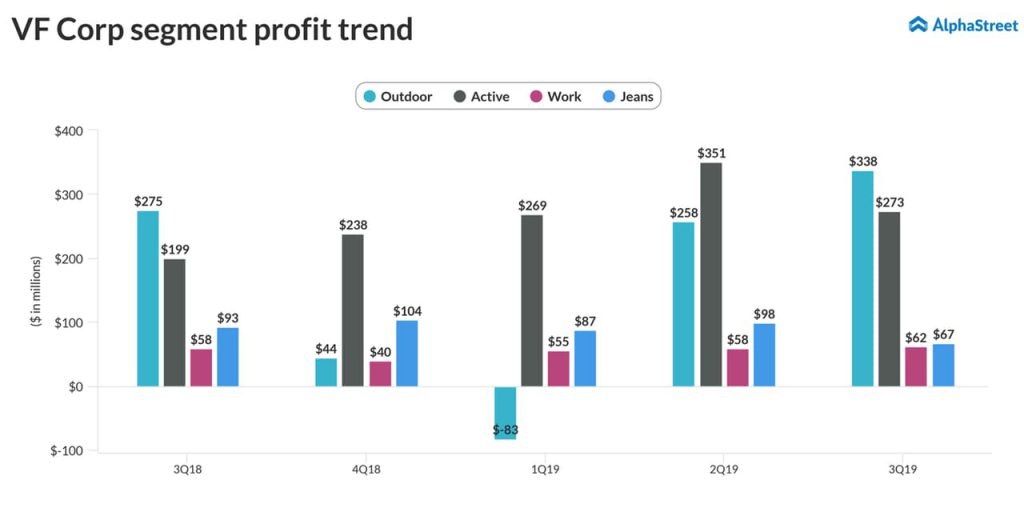 Revenues in the Active segment was primarily driven by Vans brand, which grew 25%. Meanwhile, with a 14% revenue hike, The North Face brand lifted the Outdoor segment during the quarter.

International revenue increased 5%, thanks to an 18% hike from China. Direct-to-consumer revenue was up 10%.

CEO Steve Rendle said, “Based on the strength of our third quarter performance and the growth trajectory we see for the remainder of fiscal 2019, we are again increasing our full year outlook, including an additional $45 million of growth-focused investments aimed at accelerating growth and value creation into the fiscal year 2020.”

For fiscal 2019, the company now expects revenues of $13.8 billion, an increase of 12% year-over-year. International revenue is projected to grow 10-11%, while direct-to-consumer revenue is expected to rise 13%.

Adjusted earnings are estimated to jump around 19% to $3.73 per share.

In August, the company had announced that it was spinning off its jeans business – Lee and Wrangler – as a separate company, reportedly called  Kontoor Brands. The rest of the brand portfolio – The North Face, Vans and Timberland – would stay with VF Corporation.

At the time of announcing the spin-off, the management had stated that they were splitting the company to focus on their individual growth strategies.