The company is transitioning from EV-related hardware sales to building data and software for positioning itself to meet future demand. It is estimated that in the next seven years, revenue will primarily be driven by software

When the electric vehicle market expanded by leaps and bounds in recent years, the growth of related services like power solutions and infrastructure remained relatively sluggish. Realizing that the renewable energy space needs exhaustive solutions to function effectively, VivoPower International PLC (NASDAQ: VVPR) has adopted a business model that covers all aspects of the industry.

Headquartered in London, the company has operations in the UK, US, Australia, Canada, and the Netherlands, offering sustainable energy solutions with a focus on electric vehicles, battery technology, and solar power. In an interview with AlphaStreet, chief executive officer Kevin Chin said what differentiates VivoPower from conventional players in the field is the unique and holistic end-to-end sustainable energy solution that helps customers achieve net-zero carbon emission.

On the recent acquisition of a majority stake in Dutch firm Tembo e-LV, Chin said although the deal is significant, it does not imply that VivoPower is transforming into an EV-only company. According to him, EV is only one limb of a three-limbed strategy that forms the sustainable energy solutions market. Besides EV, the company also offers site electrification services developed by a research unit in Australia to enable EVs to operate smoothly. In addition to micro-grids and charging stations, this second limb is also involved in the structuring of the site from an electrical wiring and infrastructure perspective. 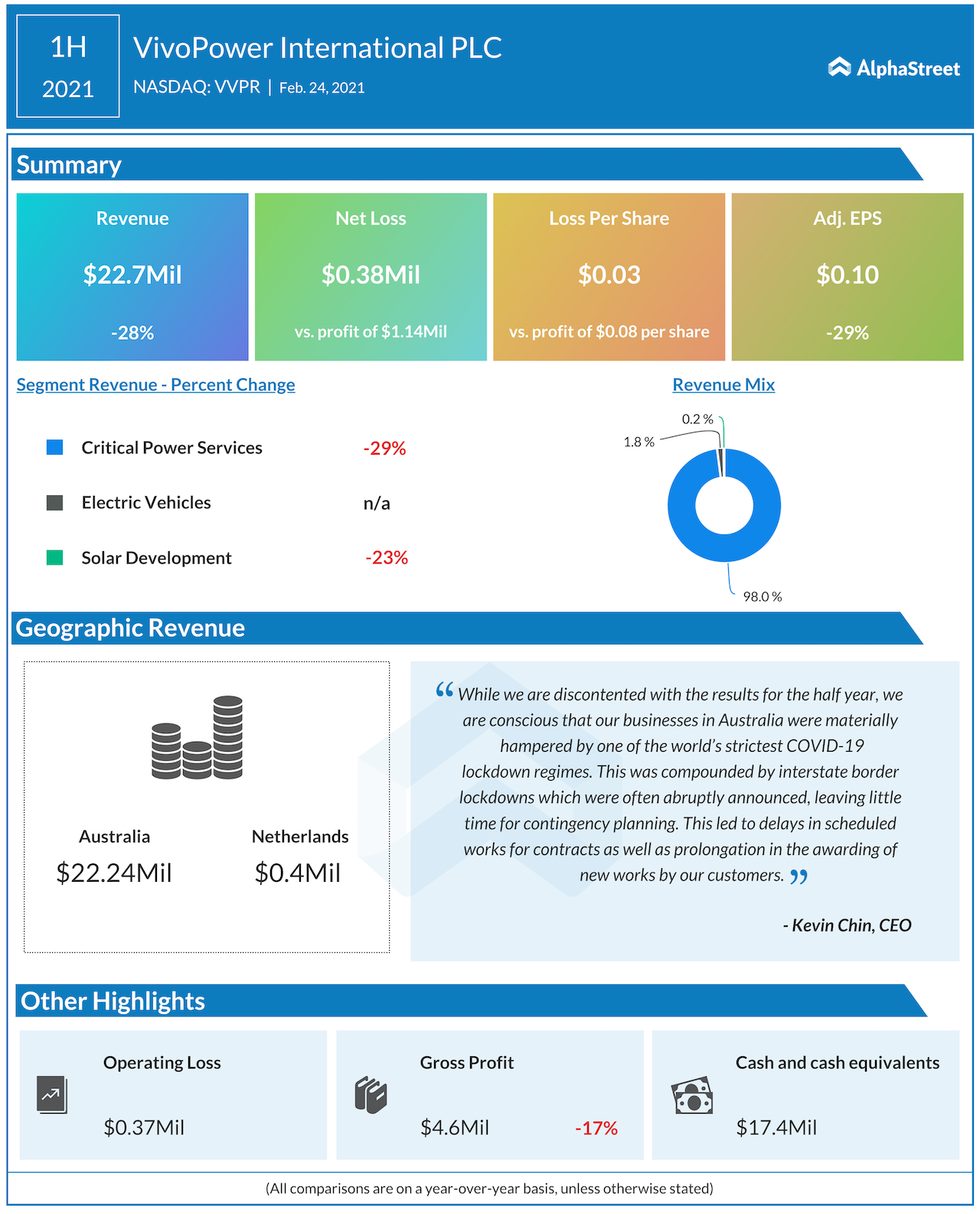 “For example, if you are a big mining company with a large mine in Australia, you have to think if you want to employ EVs how you’re going to modify your entire mine site to accommodate that. So that’s where site electrification/critical power services come in,” he said.

The third limb is all about the reuse and recycling of batteries because in EVs, once batteries reach the end of their useful life, they would still have 70-80% charging capacity. That’s what makes the Tembo acquisition relevant, for it is an enabler of VivoPower’s three-pronged end-to-end sustainable energy solutions for corporate customers.

Top hydro-power stocks to watch in 2021

So, how soon would the innovative operating model take the company to profitability? The management has modeled a three-to-five-year runway to achieve a sustainable profit with a focus on diversifying into the software business. To justify the strategy, Chin used the analogy of tech giant Oracle Corporation (ORCL) transforming from a hardware maker into a successful software company in a short period of time.

Similarly, VivoPower is transitioning from EV-related hardware sales to building data and software that is expected to assume importance over time, coinciding with its turnaround journey. It is estimated that the company’s revenue would primarily be driven by software in about seven years from now. There will be a corresponding increase in margins, like in the case of all OEMs that depend heavily on after-sales services for margin generation.

Chin is quite bullish on President Joe Biden’s policies for sustainable energy and the EV industry, marked by the proposal to electrify all government vehicles. “Despite not having a fully-fledged US presence as yet, we’ve already had… advanced conversations with potential customers that want to engage us. So Biden’s policies are already having an effect and we expect that to become even more pronounced,” he said.

But the future prospects of VivoPower might depend on how the COVID situation evolves, given its growing global presence. After being hit by logistics and supply chain disruption caused by the stringent lock-down, business is picking up in Australia, where the pandemic had a negative impact on the company’s top-line in the first half.

For the six months ended December 2020, revenues decreased 28% to $22.7 million, hurt by the virus-related slowdown. As a result, the company slipped to a reported loss of $382,000 from last year’s profit of $1.14 million. However, on an adjusted basis, it was a profit of $0.10 per share, down from $0.14 per share recorded a year ago. When it comes to capital expenditure, Tembo continues to be the first priority due to stronger-than-expected demand. The other focus area is the expansion of assembly and production facilities in the Netherlands.

The company’s stock, which is currently trading close to the levels seen at the beginning of the year, ended the last session lower. It gained manyfold in the past twelve months, emerging from the single-digit territory in the meantime.