Earnings of home appliance maker Whirlpool Corp. (NYSE: WHR) increased in the first quarter and topped expectations, aided by lower restructuring costs and one-time gains including tax benefit. The company’s stock moved up about 6% during Monday’s after-hours trading session, soon after the announcement. 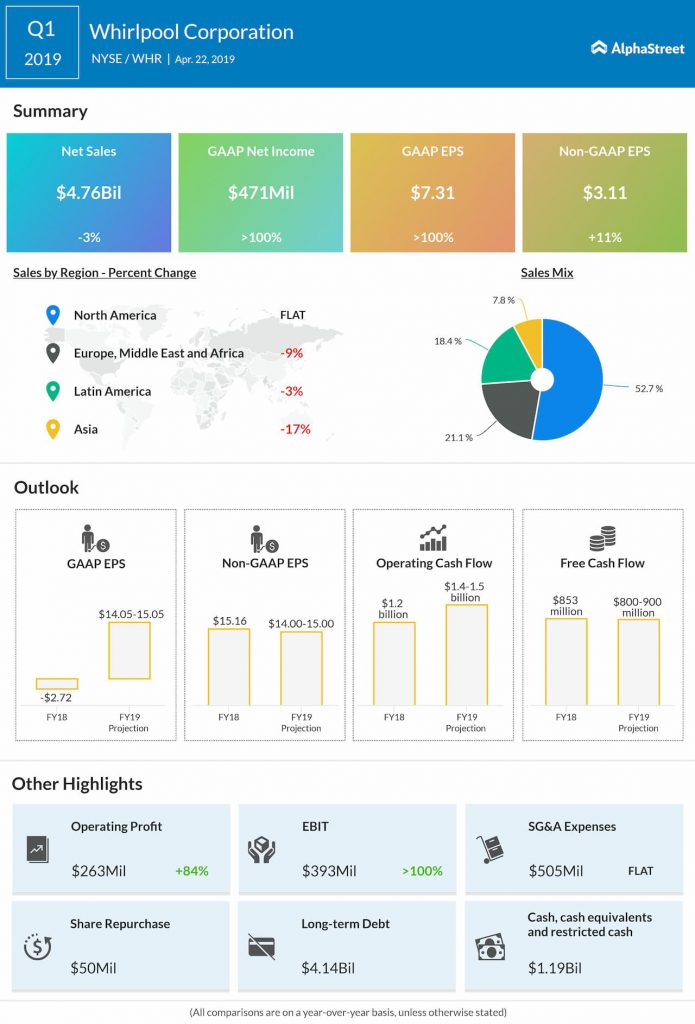 Adjusted earnings, excluding special items, advanced to $3.11 per share during the March quarter from $2.81 per share a year earlier. Reported profit was $471 million or $7.31 per share, up from $94 million or $1.30 per share in the first quarter of 2018. While the favorable price-mix added to margin growth, the bottom-line also benefitted from one-time gains.

Meanwhile, net sales of the Benton Harbor, Michigan-based company dropped 2% annually to $4.8 billion during the three-month period and missed the forecast, hurt mainly by a 9% decline in Europe, Middle East, and Africa. While sales dropped in Latina America and Asia also, they remained flat in North America.

While the bottom-line benefitted from one-time gains and tax benefit, the favorable price-mix added to margin growth

Mark Bitzer, Whirlpool’s CEO, said, “We delivered another strong quarter with margin expansion and record first-quarter earnings per share despite a soft demand environment in several countries. Successful execution of price increases and sustained focus on cost discipline drove very positive results in the first quarter, and provide confidence in our ability to deliver our full-year financial goals.”

The company said it has raised the quarterly dividend for the seventh year in a row, while also maintaining the stock repurchase program.

Whirlpool’s shares lost about 11% over the past twelve months but gained 30% since the beginning of the year. The stock traded slightly higher during Monday’s regular session and gained further in the after-hours following the earnings report.