The company added a lesser number of paying subscribers in the first quarter than expected, which triggered a stock selloff this week

While setting new trends in the business world, the pandemic-driven adoption of digital services also increased the consumption of online content. Netflix, Inc. (NASDAQ: NFLX) has been experiencing significant demand growth ever since the movement restrictions were imposed, which forced people to embrace digital platforms for work and leisure. The company is continuing with its aggressive original-content strategy, though it is being affected by production delays.

The video streaming platform expanded its user base consistently since the coronavirus outbreak early last year, but the growth momentum waned in recent months. This week, the slower-than-expected subscriber growth took the sheen off the otherwise impressive first-quarter results. Interestingly, earnings exceeded estimates this time, after missing throughout last year.

Why streaming services are set to take over the world

Netflix had an upbeat start to 2021 and the stock jumped to an all-time high in the early weeks, before retreating to the pre-peak levels. The stock, an all-time favorite of investors, has become more attractive after the recent dip. Even after outperforming the broad market, NFLX looks poised for more gains this year. Overall, experts are quite bullish on the prospects for investing in the stock.

Of late, the company has been improving its balance sheet, thanks to the strong cash flow. The management is planning to return about $5 billion through stock buyback in the coming quarters. Netflix, which often invited shareholders’ ire for its heavy cash burn, spent relatively less on content last year, which in turn contributed to the bottom-line growth. 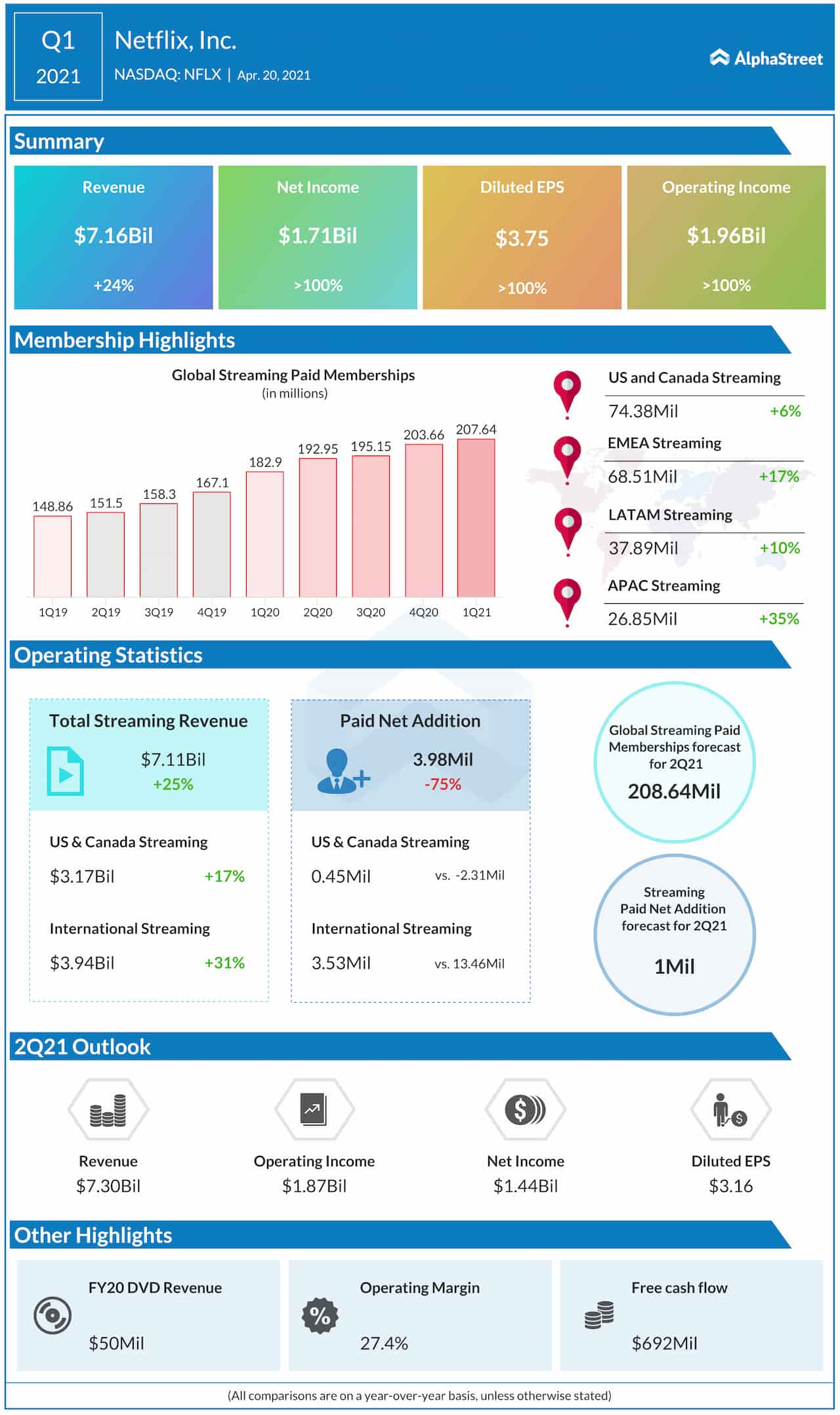 With subscriber addition being the main parameter to measure performance, Netflix is likely to find it difficult to maintain the current growth rate in a market that is becoming increasingly competitive. After the entry of new players like Walt Disney (NYSE: DIS) and Apple (NASDAQ: AAPL), the streaming space has moved closer to saturation. Also, production delays related to the pandemic might remain a drag on Netflix’s content slate in the near future.

“We’re just delivering more value to our members. If we do that well, then we can occasionally go back and ask them to pay a little bit more to keep that positive cycle going. So having said that, I just want to reiterate, we think there is still an amazing entertainment value. We want to remain an incredible value compared to our competitors and the competitive offerings that are out there broadly. So even as we continue to improve the service we’d like to have that in mind and we want to make sure that we’re accessible to more and more people on the planet through that process.”

Netflix had more than 207 million paid subscribers at the end of the first quarter, which is up 14% from the year-ago period but below analysts’ consensus forecast. In a sign that the softness would continue, the management issued modest guidance for the second quarter. Revenues jumped 24% from last year to $7.2 billion, and earnings more than doubled to $3.75 per share. The numbers also came in above the consensus estimates.

This week, shares of the company traded well above their 52-week average, despite withdrawing from the record highs of January. The stock has gained 29% in the past twelve months and hovered near $550 early Wednesday. It closed the last session lower.