Will restructuring help Coca-Cola (KO) refresh its business this year?

Things have not been in favor of The Coca-Cola Co. (NYSE: KO) lately, with profits coming under pressure from faltering sales, amid rising competition and changing consumption patterns. For the soft drink giant, 2020 was one of the most challenging years when the virus crisis and legal issues added to its woes. Meanwhile, the recent improvement in performance has raised hopes of a recovery this year.

The Atlanta-based company experienced weak demand most of last year, in the absence of major sports events and theatre shows that typically contribute significantly to its revenues. Though it was partially offset the shopping spree in the early pandemic days when people stockpiled on food items, sales declined across the board, weighing on profitability. The underlying pressure on revenues, mainly due to the change in people’s spending patterns, made the market take a cautious stance. It’s been nearly one year since the stock retreated from its peak. Though it hit the recovery path soon after the selloff early last year, the process has been sluggish.

The company suffered a setback after it was found to have defaulted on tax returns valued at about $3.5 billion, for the period between 2007 and 2009. A court order in favor of the revenue recovery authorities triggered rating downgrades that hit investor sentiment. Curiously, the weakness was widespread across all geographical segments, signaling that the management has a tough task at hand.

While maintaining the positive target price, analysts have a mixed view as far as recommending the stock is concerned. The double whammy of COVID-linked slowdown and the tax case seems to have outweighed the promising long-term prospects of the stock, thanks to the solid fundamentals. In short, it makes sense to wait at least until the next earnings release before buying Coca Cola, considering the damage the legal action could cause to the company. 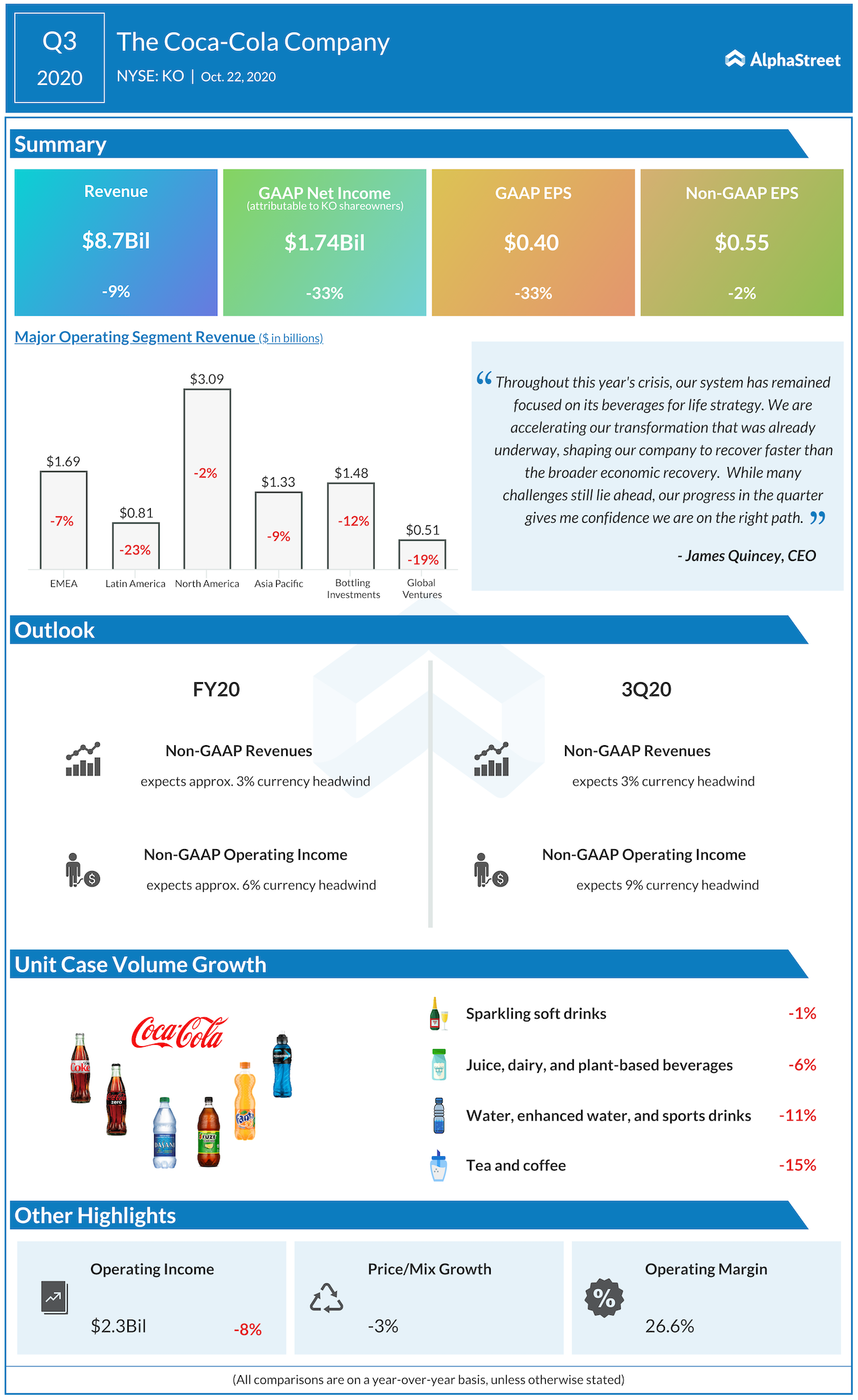 Taking a cue from the recent downturn in the business, the management embarked on an organizational restructuring that includes a 17% reduction in the workforce globally. Another focus area of the overhaul is to reduce the number of brands by 50%, thereby doing away with the underperforming brands and promoting those which are doing well. It is expected that Diet Coke, which has failed to meet expectations, Fiesty Cherry, Tab, Zico, and Odwalla would be dropped. Also, the company will have fewer operating segments after the rejig.

The management expects these measures to come in handy when markets reopen – in maintaining the modest recovery seen in recent months. Last year, Coca-Cola managed to generate profit that either matched or exceeded the market’s prediction and the trend continued in the September-quarter. But revenues and earnings declined year-over, as they did in the previous quarters. At $8.7 billion, third-quarter revenues were down 9%, which resulted in a 2% drop to $0.55 per share.

“We continue to see progress, but the environment remains dynamic, and it is not a straight-line recovery around the world. Different markets are seeing varying degrees of impact. In EMEA, at-home channels continued to perform well and sparkling soft drinks and juices remained resilient. Volume improved in away-from-home channels throughout the quarter as activities resumed with limitations. In Latin America, volume improved as government restrictions eased, specifically, Brazil continues to be an outperformer. The economic pressures remain, and our recovery in Mexico has been slower than expected.

Coca-Cola’s stock had a dismal start to 2021 and slipped below the $50-mark once again this week, reversing most of the recent gains. The stock picked up some momentum in early trading Monday, after losing about 6% since the beginning of the year.