With Iger back at the helm, Walt Disney looks headed for a transformative year

The Walt Disney Company (NYSE: DIS) ended fiscal 2022 on a mixed note as weakness in the streaming business nearly offset benefits from the reopening of parks and amusement centers. The House of Mouse is putting high stakes on the newly launched streaming business, which has cushioned the impact of recent slowdown in its legacy business to some extent. But the management’s biggest bet is on the reappointment of former head Bob Iger as the chief executive officer, to replace Bob Chapek.

The market responded positively to the leadership change, which came as a surprise to many, and Disney’s stock made strong gains early Monday. The industry veteran who served the company for around 40 years, including one-and-half decades as the CEO, was instrumental in Disney’s growth from a traditional amusement park business into what it is now.

At its peak, the Burbank-headquartered entertainment behemoth’s stock traded slightly above $200 in early 2021. The stock retreated gradually since then, often failing to sustain the recoveries it had along the way. Most recently, the unimpressive fourth-quarter results added to the weakness, and the stock slipped below the $100-mark following the announcement.

But Disney is not the only stock that is trading below the long-term average, rather the downturn is in line with the general market trend. Like many Wall Street stocks, DIS seems to have bottomed and that offers an opportunity to buy the stock. Experts’ general view is that the downturn is almost over, and the stock is on track to reclaim its lost charm next year. 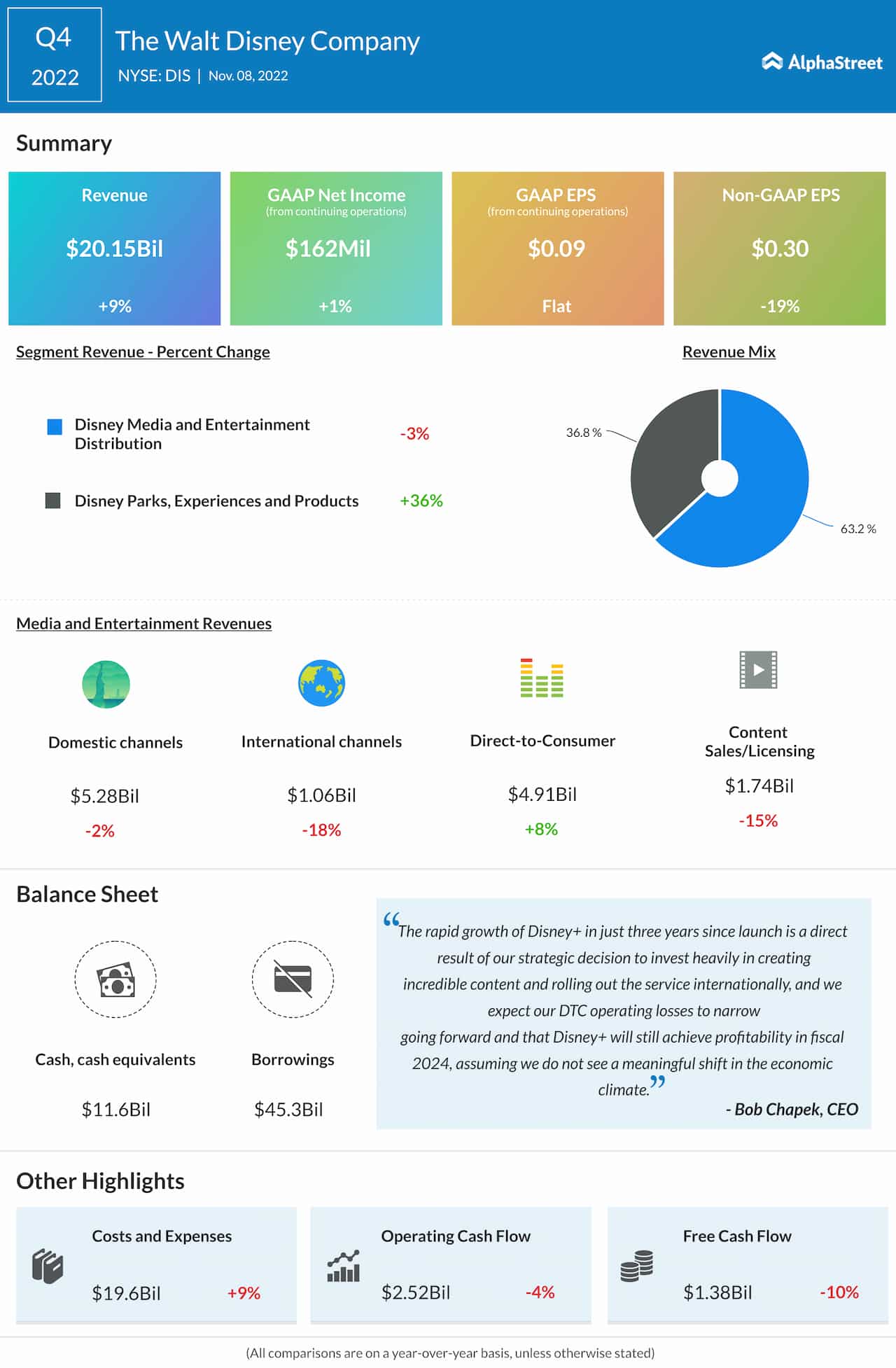 Fourth-quarter revenues and earnings fell short of expectations after three consecutive beats. The Disney+ streaming service added around 12 million subscribers in the final three months of 2022. But total media and entertainment revenues dropped 3%, restricting net revenue growth to just 9%. The Parks business grew by a third, driving up the top line to around $20 billion. Meanwhile, adjusted earnings dropped 19% to $0.30 per share as margins continue to be under stress.

“2022 was an important year of recovery coming out-of-the pandemic as we made foundational investments in our long-term success. As we celebrate the three-year anniversary of Disney Plus this week, I can’t help but reflect upon how our commitment to and substantial investments in our DTC business have helped create the world’s most powerful suite of streaming services with the ability to reach hundreds of millions of viewers around the world with must-see content,” Chapek said at the earnings call.

The growing demand for online entertainment and rapid advancements in information technology bode well for Disney+. The management is optimistic about this loss-making division turning profitable in the next couple of years, aided by aggressive investments in content creation and global expansion. It banks on the upcoming ad-supported version of the DTC service and price hike planned for later this year. When it comes to growing its foothold in that space, Disney needs to perform the tough task of competing effectively with market leader Netflix Inc. (NASDAQ: NFLX). A lot will depend on how the economic climate evolves, in terms of the Federal Reserve’s monetary tightening program and changes in the inflation environment.