A rather ungracious exit for Papa John’s founder

It’s not easy to part ways with the company you founded. It’s even harder when you have to leave the firm in an unceremonial way after spending more than three decades seeing its growth. But in life, you need to expect the unexpected – like Papa John’s founder John Schnatter who departed from the Chairman position last week. Investors have given thumbs up to the decision with the stock surging 11% the next morning.

The sudden exit of Schnatter was mainly due to the racist comments he made during a meeting with a marketing agency in May. Last week, Forbes reported the issue in detail sending the stock down 5% and during the day hitting $47.80 mark recording a new 12-week low for the company. After the news broke out, Schnatter apologized stating, “Regardless of the context, I apologize.”

Papa John’s board accepted Schnatter’s resignation and has started looking for his replacement, which is expected to be announced in a few weeks. Olivia Kirtley will be the lead independent director. The founder’s exit comes just seven months after he stepped down from the CEO role due to his comments about National Football League (NFL), which backfired forcing Papa John’s (PZZA) to apologize for the issue.

The University of Louisville also decided to take off Papa John’s name from its stadium and also removed Schnatter from its business school. The Papa John’s founder also resigned from the university’s board of trustees after the news broke out.

Last Friday in an interview to a TV station in Louisville, Schnatter alleged that media agency Laundry Service demanded $6 million from the company in order to stop revealing details about the meeting in May. He added that since he didn’t abide by their conditions, the agency shared it with Forbes.

Post the interaction with media, Papa John’s board on Sunday restricted Schnatter from any further communication. In addition, the board has decided to take off his photos from all ads, which means Schnatter who has been the face of the brand since the company’s inception, will not be seen in the pizza boxes.

The company also canceled the leasing agreement with Schnatter, meaning he can’t use the office space allocated in the headquarters. It seems clear that the company wants to stay away from the issues the founder is facing for quite some time.

Schnatter founded Papa John’s in 1984 from his father’s tavern. It has now grown to more than 5,000 stores globally over three decades. It became the official pizza sponsor of NFL in 2010, which gave better brand visibility and sales. The partnership started showing cracks last November when Schnatter in an earnings conference call alleged the drop in comp-store sales and earnings to how NFL has managed the player protests, stating, “NFL leadership has hurt Papa John’s shareholders.”

Papa John’s also trimmed its 2017 outlook. North American comp-store sales were forecasted to increase by 1.5% compared to 2-4% guided earlier. Earnings growth was revised downwards to 3-7%, much lower than the 8- 12% outlook provided. 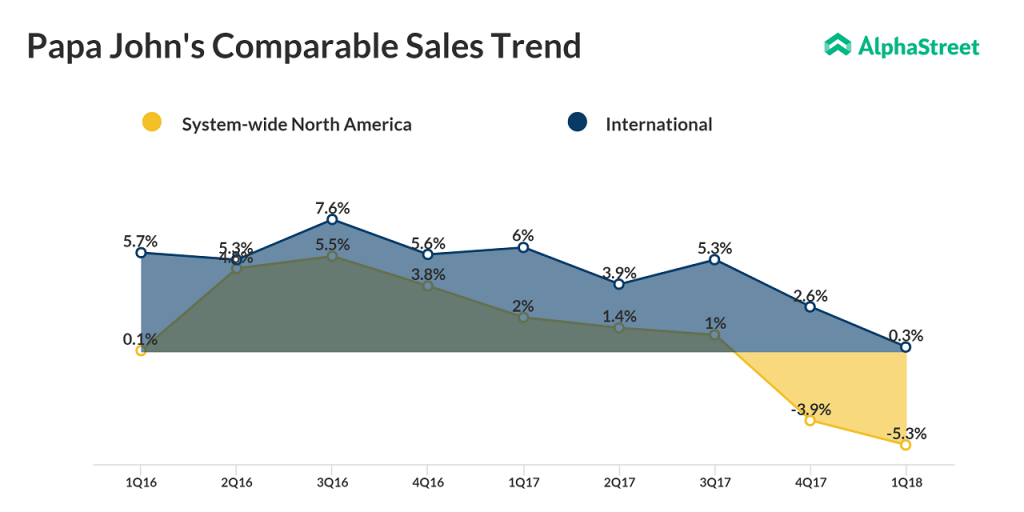 Schnatter’s blame game on NFL for dwindling sales didn’t find any takers. The comments made by him caused a huge backlash on social media forcing the company to apologize within a couple of weeks. Last December, Papa John’s announced that Steve Ritchie will be replacing Schnatter as CEO from 2018.

In February, NFL ended its sponsorship deal with Papa John’s putting an abrupt end to eight-year courtship, which was supposed to be running till 2020. NFL inked a deal with Pizza Hut, part of Yum! Brands (YUM) as the official pizza sponsor post the break-up with Papa John’s.

Papa John’s is facing intense competition from its peers Domino’s and Pizza Hut. The rivals are investing in revamping their technology and marketing efforts and have introduced loyalty programs and discounts to woo customers, which is making life tougher for Papa John’s. 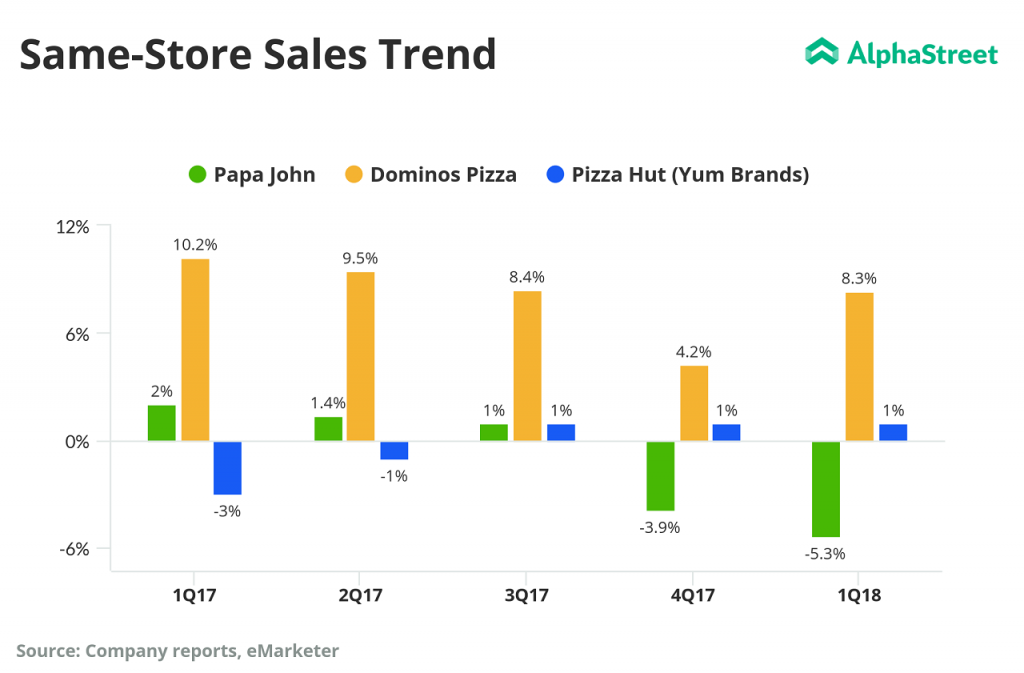 Incoming CEO Ritchie has an arduous task at hand. The pizza chain is yet to come out of the NFL-related issues, which started in November. Now with the racist remarks controversy, things are not going to be easy.

Ritchie needs to come up with a turnaround plan bringing in differentiated products at affordable prices, revamp technology and digital initiatives, beef up marketing, and more importantly make sure it is improving its market share by luring more customers.

It’s indeed testing times for the pizza chain to come out of the founder’s shadow on the company amidst changing consumer needs.

Investors will be keeping a close eye on the company’s performance. It would be reporting its second-quarter results in the first week of August. The pizza chain stock has lost more than 30% in the last 12 months and in 2018 it has slipped nearly 7%.