AbbVie’s first quarter results topped analyst consensus both on earnings and sales front, driven by double-digit sales growth from Humira, Imbruvica, and HCV. Sales improved 21.4% to $7.9 billion, while adjusted earnings came in at $1.87, up 46%. The company also has decided to buyback shares to the tune of $7.5 billion, as part of the $10 billion share repurchase program announced last quarter.

Humira’s sales rose 14.4% to $4.7 billion. It’s worth noting that the blockbuster drug brings in nearly 60% of AbbVie’s sales. The company needs to reduce its dependence on the anti-inflammatory drug, diversifying its product pipeline.

Humira is expected to rake in more than $20 billion by 2020. AbbVie has been successful in ring-fencing the drug in the US, as it has inked deals with several of its peers to stop launching biosimilars until 2023. This is going to augur well for the company for the next few years. 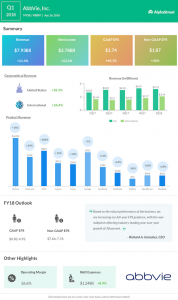 The drugmaker expects the tax rate for 2018 to be at 9% post the tax reforms. However, on an adjusted basis, the tax rate is going to be likely at 13% over the next five year due to increased sales and investments in the US.