Abiomed’s (NASDAQ: ABMD) stock plunged about 17% in the pre-market trading as the company failed to meet top-line estimates. It touched a new 52-week low level of $228 today post the weak sales numbers. However, earnings surpassed expectations by a huge margin aided by one-time gains from investments from Shockwave Medical. Sales miss was due to weaker sales in March. The company’s stock price touched a new 52-week low of $244 last Month and has lost nearly 15% in 2019.

Commenting on the Q4 revenue miss, CEO Michael Minogue said, “Q4 did not meet our expectations. I take full responsibility for our disappointing performance given a soft March, and we have already initiated a plan of action to correct the course.”

For the fourth quarter, revenue improved 19% to $207.1 million, compared to $218.9 million expected by the street. However, earnings doubled to $1.8 per share over last year, surpassing $1.08 per share estimated by analysts. Profits in the Q4 were benefited by an unrealized gain of $31.2 million from its investments in Shockwave Medical. 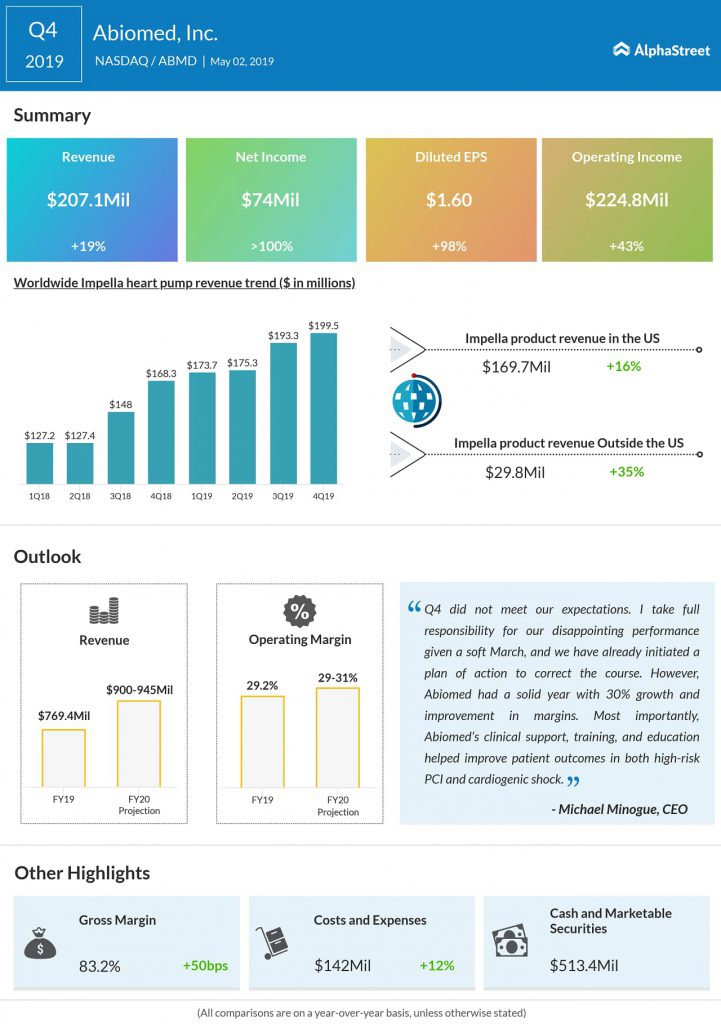 The flagship product for Abiomed has been Impella which brings in lion’s share of the revenue. Global Impella sales improved 19% to $199.5 million with the US bringing in $169.7 million (up 16%) and outside the US contributed $29.8 million (up 35%).

For the fiscal year 2019, revenue rose 30% to $769.4 million, which failed to meet its outlook provided last quarter hurt by Q4 revenue dip.

Last quarter, Abiomed reported a 30% jump in revenues of $200.6 million while earnings skyrocketed 235% to $0.97 per share aided by lower expenses and tax provisions over the prior year period. Impella revenues jumped 31% to $193.3 million with the US contributing $165.7 million and global sales contributing $27.5 million due to strong growth in Germany and Japan.

Healthcare sector has been underperforming this year mainly due to political pressure. There is increased support for universal health coverage with Sen. Bernie Sanders pitching for “Medicare for All” plan aimed at providing quality healthcare coverage for US citizens at affordable prices. Investors are worried that increased regulation would impact profits for companies like Abiomed and its peers in the near future.

However, the heart pump maker has a lot of tailwinds on its stride. Impella is a niche product with lower penetration rates in the US and across the globe which would bring in consistent growth in the long-term. In addition, since the market is at its infancy with less competition, Abiomed has less pressure on pricing which would continue to bring in stable earnings. Unlike its peers, the company follows a lean structure which requires less capital spending which is beneficial to the firm in the near future.

The company’s stock price touched a new 52-week low of $244 last Month. However, it has recovered 14% after that till date. With solid fundamentals and huge market demand to tap, Abiomed seems to have multiple tailwinds helping it to register strong growth in the years to come. Analysts believe in the strong growth potential of the firm and are expecting the stock to touch $415 levels in the next 1 year.