The ACSI survey assessed the products and services quality along with satisfaction levels based on responses from 22,500 customers looking at over 380 companies in 46 industries. Restaurants were scored on a scale of 0 to 100 based on several factors including food quality and accuracy, restaurant cleanliness and staff behavior.

The limited-service restaurant category saw an overall improvement of 1.3% in its score for customer satisfaction, while the full-service restaurant category saw its total score increase by 3.8%. In the limited-service group, Chick-fil-A had the highest score of 87, which remained unchanged from 2017, while Panera Bread came in at second place with a score of 81, which dropped 1% from last year. 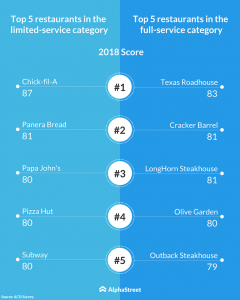 In the full-service restaurant group, Texas Roadhouse (TXRH) came in first with a score of 83, reflecting a 1% improvement from last year. Cracker Barrel (CBRL) and Darden Restaurants’ (DRI) LongHorn Steakhouse both tied for second place with a score of 81.

Red Robin saw the highest improvement from last year of 8% while LongHorn Steakhouse saw a 5% increase. Ruby Tuesday (RT) and Denny’s (DENN) were at the bottom of this list with scores of 78 and 77 respectively. A shift to healthy food options helped full-service restaurants improve their performance in terms of food quality.