Alaska Air Group (ALK) reported a 5% increase in total operating revenue to $1.8 billion in the first quarter of 2018, compared to the year-over period. Net income on a GAAP basis came in at $4 million or $0.03 per share, versus $93 million or $0.75 per share in the prior-year period. The earnings were hurt by higher operating expenses, which increased 14% during the quarter.

Excluding special items, net income for the first quarter was $18 million or $0.14 per share.

The company said it paid a $0.32 per share quarterly cash dividend in Q1 2018, an increase of 7% over the Q1 2017 dividend. Share repurchases totaled approximately $12 million during the quarter. 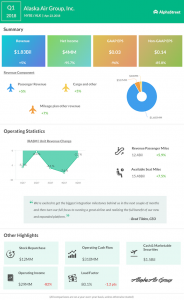 Operating cash flow amounted to about $310 million, while capital expenditures were around $235 million in Q1 2018.