Google parent Alphabet (GOOG, GOOGL) reported better than expected earnings and revenues in the first quarter, helped by a strong performance in the advertising division. The impressive results indicate Google managed to weather the headwinds facing the online ad business in the wake of the recent data breach scandals.

Earnings of the search service behemoth jumped 72% year-over-year to $13.33 per share. Revenues climbed 26% to $31 billion, helped by a 24% increase in the advertising business, which accounts for the lion’s share of the company’s revenue. 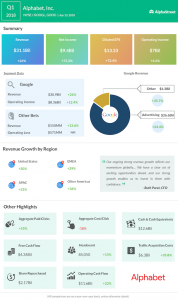 The Other Bets segment remained in the negative territory, but the operating loss narrowed to $571 million from $703 million in the first quarter of 2017.

In a departure from its usual reporting method, in the most recent quarter, the company included its smart-home unit Nest in the Google Other segment, which registered a 36% revenue growth.

“Our ongoing strong revenue growth reflects our momentum globally, up 26% versus the first quarter of 2017 and 23% on a constant currency basis to $31.1 billion. We have a clear set of exciting opportunities ahead, and our strong growth enables us to invest in them with confidence,” said Google CFO Ruth Porat.

Revenues climbed 26% to $31 billion, helped by a 24% increase in the advertising business

The first quarter results have come at a time when regulators are strictly scrutinizing the operations of internet companies, following the Cambridge Analytica data breach controversy involving Facebook. The shift in advertisers’ approach to online ads could be a challenge for Google in the coming quarters.

GOOGL shares had cooled off in recent weeks when online advertisement firms came under the scanner. The stock, which rose steadily in Monday’s regular session after an initial dip, gained further in the after-hours and then it was trading flat following the earnings release.

On Wednesday, Facebook (FB) will be releasing its first quarter earnings results after the data leak controversy hit the tech sector recently.