Amazon (AMZN) today said its first-quarter profit more-than-doubled as revenues rose sharply, supported by the cloud division, surpassing market expectations. Shares of the company gained around 7% in the after-hours, following the earnings announcement.

First quarter revenues grew 43% to $51 billion. The top-line includes sales of Whole Foods, which was recently added to Amazon’s fold.  Meanwhile, the benefit of strong revenue growth on earnings was partially offset by a 42% increase in operating expenses. 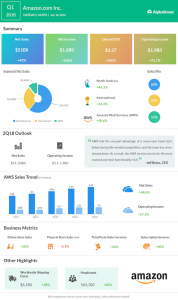 “AWS had the unusual advantage of a seven-year head start before facing like-minded competition, and the team has never slowed down. As a result, the AWS services are by far the most evolved and most functionality-rich,” said Amazon CEO Jeff Bezos.

Encouraged by the robust results, the e-commerce firm said it expects second-quarter sales to grow 34-42% year-over-year to the range of $51 billion to $54 billion. The company sees operating income between $1.1 billion and $1.9 billion for the quarter.

Recently, Amazon and its chief Bezos had come under fire from President Trump, who in a series of Twitter posts accused the company of defaulting on tax payments. Trump alleged that Amazon’s phenomenal growth was a cause of concern for traditional retailers. The Prez also targeted the Bezos-owned Washington Post for allegedly spreading propaganda.

Earlier this month, Amazon entered into a partnership with rival retailer Best Buy (BBY) to sell the advanced version of its Fire TV Edition smart TVs to customers in the US and Canada. This week, the company launched a unique facility to have merchandise delivered in customers’ cars.

Yesterday, eBay (EBAY) reported a 58% fall in first-quarter earnings to $0.40 per share, owing mainly to higher expenses and tax-related charges. Adjusted earnings were up 9%.