The numbers are finally out. Amazon.com Inc. (AMZN), which never reveals its Prime membership stats, has now disclosed that it has crossed 100 million subscribers. CEO Jeff Bezos revealed the figures in his annual letter to shareholders and pledged to continue investments to meet the increasing customer expectations.

Amazon Prime offers speedy delivery of goods ordered online, along with music and video streaming services on annual and monthly subscriptions. Prime members are said to shop around twice as much as regular subscribers to make the most of their subscriptions. Amazon pampers its Prime customers from time to time by adding more offers and benefits. The proof is in the pudding as Prime’s membership retention rates stand in the 90% range.

This disclosure also points to the international growth of Prime subscriptions, which appears to enjoy the same success as the US membership pool. Amazon has been investing heavily in overseas expansion, a physical store footprint and in its digital devices. The online retailer plans to continue investing in its infrastructure and customers. 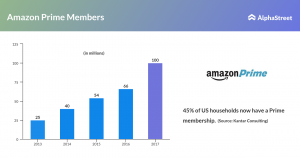 Although Amazon’s heavy investments have kept its profits down, investors have retained their confidence in the company and on Bezos’ ability to find new markets and revenue sources. The growth in Prime membership is likely to boost this confidence.

Amazon’s strength doesn’t stop there. The company enjoys a strong position in the rapidly growing cloud computing market and it is also developing its advertising business. Amazon is also improving its line of devices and expects to see more growth and expansion in this area too.

Meanwhile, the e-commerce giant has its fair share of challenges. Its tussle with Walmart (WMT) continues in the grocery space. Note that Amazon is still working on improving its services with the Whole Foods business. On top of this, President Trump has severely criticized Amazon on taxes, competition and its post office deal. Amazon chose to stay mum on these matters.

One of the most famous anecdotes about Jeff Bezos is that of the ‘breakfast octopus’. Matt Rutledge, who sold his company Woot to Amazon in 2010, described one of his meetings with Jeff Bezos in which he asked the Amazon chief why he bought Woot.

Bezos famously replied, “You’re the octopus that I’m having for breakfast. When I look at the menu, you’re the thing I don’t understand, the thing I’ve never had. I must have the breakfast octopus.”

This gives an interesting look at Bezos’ way of thinking. Perhaps it is this type of dynamic viewpoint that has enabled the billionaire gain a cult-like status for his strategy similar to that of Warren Buffet.

Amazon’s stock saw a rise on this news and the climb is likely to continue. It appears Bezos can count on his shareholders to stand with him all the way.