Advanced Micro Devices (AMD) stock inched higher on Monday, with shares jumping more than 21% in the past 52 weeks and 64% year-to-date. Market analysts expect the company’s stock to rise even further driven by new product ramps and its capacity to survive the trade war concerns. It is also speculated that AMD will release three graphics processor units this year.

AMD is expected to be benefited from business volume, premium notebooks and gaming PCs as well as moderation of graphics card prices, according to research firm Stifel. The company can deliver higher revenue growth during next year backed by its efficiency to seize PC and server CPU from Intel (INTC). 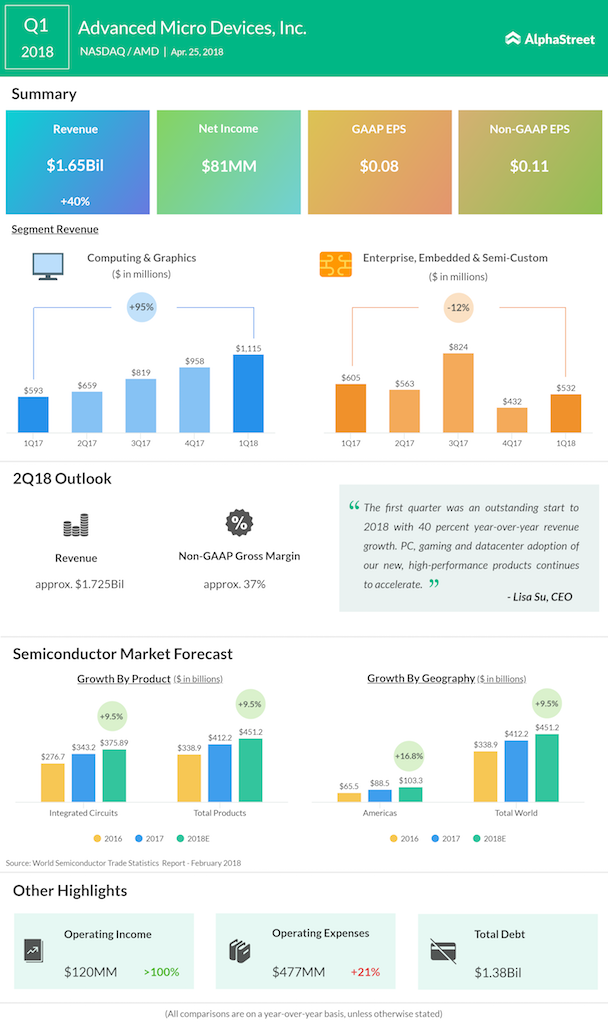 Besides, field checks conducted by Bluefin Research showed that the company’s roadmap has been very positive after the disappointment surrounding Intel. The primary demand driver for AMD remained to be data centers and investors are expected to target on the growth from these.

Bluefin believes that there remained no product launches in the near term and these along with weakness in graphics could hurt AMD in the upcoming quarter. But, the data center momentum could turn the sluggish graphics card sales and weak crypto demand to positivity and will remain the primary driver for the company.

The rumor mills have started churning that AMD is gearing up for three GPUs launches during this year. And, a third in Polaris series is expected to be built on GlobalFoundries 12-nanometer node that is touted deliver 15% better performance than its previous edition. At Computex 2018 conference, AMD revealed its 7-nanometer Vega GPU that will provide 30% more performance than the 14-nanometer predecessor, and this is aimed at artificial intelligence and machine learning applications.

Also, International Data Corporation data suggested that traditional PC shipments grew 2.7% to 62.3 million. And this data along with below-seasonal gaming console-related revenue growth to drive the results in the upcoming quarter. Stifel believes the PC and server CPU market has a wide scope and AMD could achieve a greater share in the market throughout 2019.