The world’s biggest airline American Airlines Group Inc. (AAL) reported a 45% plunge in first-quarter earnings due to higher fuel prices but came in ahead of Street expectations. The company also lowered its fiscal 2018 earnings outlook citing to rising fuel concerns. Following the report, the stock is down 4.53% in the premarket.

Looking ahead into the second quarter of 2018, American Airlines expects total revenue per available seat mile to increase about 1.5-3.5% year-over-year, which reflects expected continued improvement in demand for both business and leisure travel. Pre-tax margin excluding special items is predicted to be 7.5-9.5% range. For fiscal 2018, the company lowered EPS excluding special items guidance to a range of $5.00-$6.00 from the previous estimate of $5.50-$6.50.

Lately, oil prices have been on an uptrend and were up about 8% in the March quarter. As fuel costs account for a significant chunk of expenditures, high oil prices do not bode well for companies in the airline space. 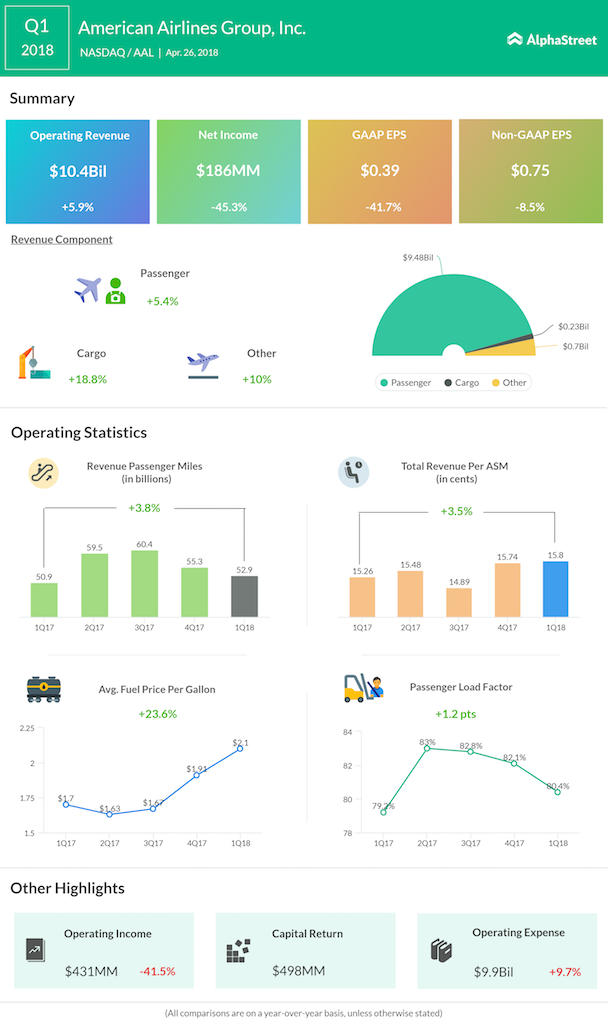 A 25.7% increase in consolidated fuel expenses drove operating expenses higher by 9.8%. If fuel prices remained unchanged from last year, then total expenses would have been $412 million lower.

American Airlines intended to retire older aircraft, including the Airbus A330-300, the Boeing 767 and certain Boeing 777-200s and replace these with its new recent order for 47 Boeing 787s. The company expects this to provide improved fuel efficiency, lower maintenance costs, greater range and enhanced customer experience.

On operating statistics front, American Airlines had a 3.8% increase in revenue passenger miles or traffic for the first quarter of 2018 and a 2.3% rise in available seat miles or capacity. Passenger load factor rose 1.2 points to 80.4%. Fuel consumption rose 1.6%, and average aircraft fuel price including related taxes climbed 23.6%.