Net income jumped 38% annually to $1.86 per share in the first three months of 2018. Consolidated revenues moved up 12% to $9.7 billion, supported by strong cardmember spending and new card additions pursuant to the Hilton portfolio acquisition. The topline came in above Street expectations. 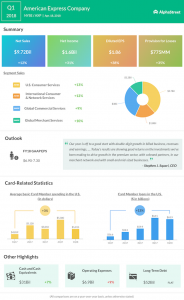 Driving the overall growth, revenues of the US Consumer Services division advanced 13%, and those of International Consumer & Network Services grew 12%. Among the other segments, revenues of Global Commercial Services were higher by 9% compared to last year. The Global Merchant Services segment posted the biggest gain of 32%.

Announcing the first quarterly results since Stephen Squeri took the reins in February, the New York-based company said its first-quarter results benefitted from a sharp decline in the effective tax rate, as a result of the recent income tax reform.

“Today’s results are showing good returns on the investments we’ve been making to drive growth in the premium sector, with cobrand partners, in our merchant network and with small and mid-sized businesses,” said Squeri.

Encouraged by the impressive results, Amex upgraded its 2018 earnings outlook to the high end of the $6.90-$7.30 estimate. Full-year revenues are currently expected to grow 8%.

The company had temporarily suspended its share buyback program in the fourth quarter to rebuild capital, after incurring a massive charge related to the income tax overhaul.

Among competitors, Bank of America (BAC) reported blockbuster earnings in the first quarter, helped by the upbeat economy and tax cuts. Visa (V) is scheduled to report its second-quarter results on April 25. Mastercard (MA) will be announcing first-quarter numbers on May 2.