In the midst of Amgen (AMGN) facing intense competition for its blockbuster products from its rivals, the pharma company posted better-than-expected second-quarter results – amidst fierce competition and growing concerns from the public to make drugs affordable. Shares of Amgen rose above 1% in the after-hours trading.

With the recent launch of new products, sales improved 4% to $6.05 billion while profits jumped 17% touching $3.83 per share due to strong product sales. Free cash flow for the quarter came in at $1.9 billion, down 9.5% compared to last year due to increased tax outgo. Selling, General & Administrative expenses increased 12% due to product launches and increased marketing costs. 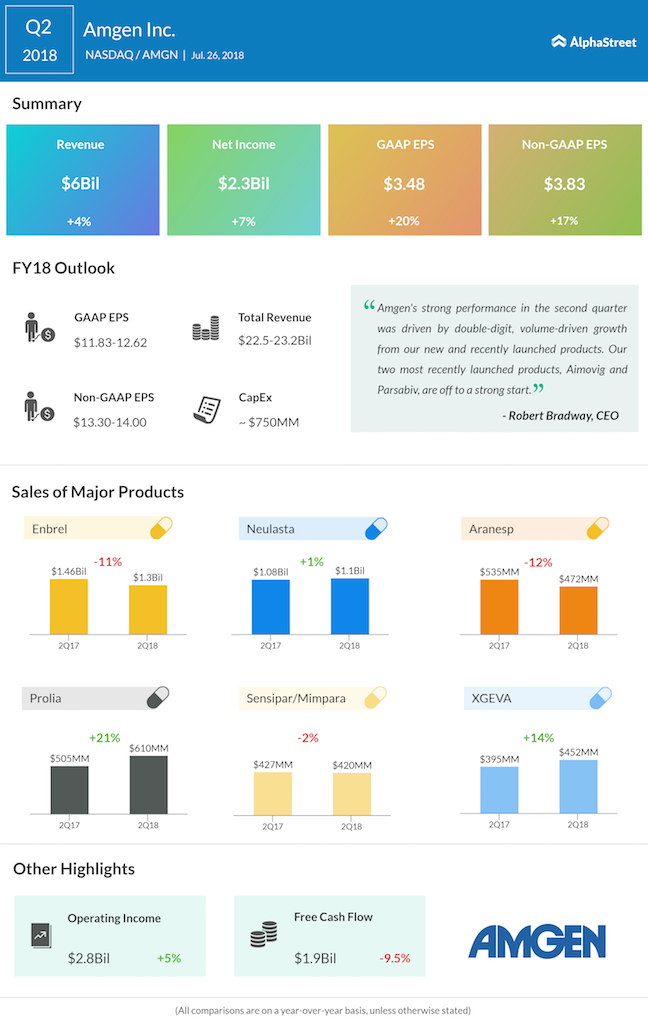 The company has been witnessing a drop in revenues from old blockbuster drugs due to the launch of biosimilar from its peers. However, this is expected to be offset by the recent launches which look promising and expected to augur well for Amgen.

On the product sales front, sales of cholesterol drug Repatha surged 78% due to strong demand and drugs like BLINCYTO, KYPROLIS, Prolia, and XGEVA recorded double-digit growth which is a good sign for the company. Product sales rose 2% compared to last year touching $5.68 billion.

In May, FDA has given the nod for Aimovig, a drug used for treating migraine patients is expected to be a blockbuster drug. Along the same lines, other drugs like Xgeva, Prolia, KYPROLIS, BLINCYTO, and Repatha is expected to bode well in the upcoming quarters. Amgen also has a robust pipeline with the likes of Amjevita, which is expected to hit the market in October augmenting its potential blockbuster list.

Amgen has raised the outlook for 2018 due to improved product sales and strong product pipeline. The company now estimates sales to be between $22.5 billion and $23.2 billion and adjusted EPS revised upwards in the range of $13.30 to $14. In the last 12 months, the stock price has increased above 10% and in 2018 it’s up nearly 12%.

On a separate note, the biotech giant announced changes in two key leadership roles. Sean Harper who is heading R&D has announced his retirement after spending 16 years with the firm. He will be replaced by David Reese who is currently looking after Translational Sciences and Oncology. In addition, Global Commercial head Anthony Hooper is planning to retire in September 2018, and the current Chief Commercial Officer Murdo Gordon will be succeeding Hooper.

Last week, Johnson & Johnson (JNJ) reported that its Q2 results topped analyst estimates on both the top and bottom line aided by double-digit growth in Pharma business and the accelerating sales momentum in the Medical Devices business.