AngioDynamics (ANGO) reported first quarter earnings of $0.16 per share, which missed analyst estimates. However, the medical device maker’s top line surpassed street consensus. Shares of the company were trading down 8% at 12:22 am ET.

The company reported flat revenues of $85.3 million over last year, hurt by 6% slump in oncology product sales, primarily due to a drop in sales from the radiofrequency ablation line. The company also had a one-time impact in the quarter due to its transition from Acculis to Solero product line.

On the geographic front, AngioDynamics continued last quarter’s trend with US sales dipping nearly 2% over prior year, and international sales growing 7% due to the increased adoption of its products. In the first quarter, the company also paid $12.7 million in lieu of the legal allegations faced with the Justice Department. 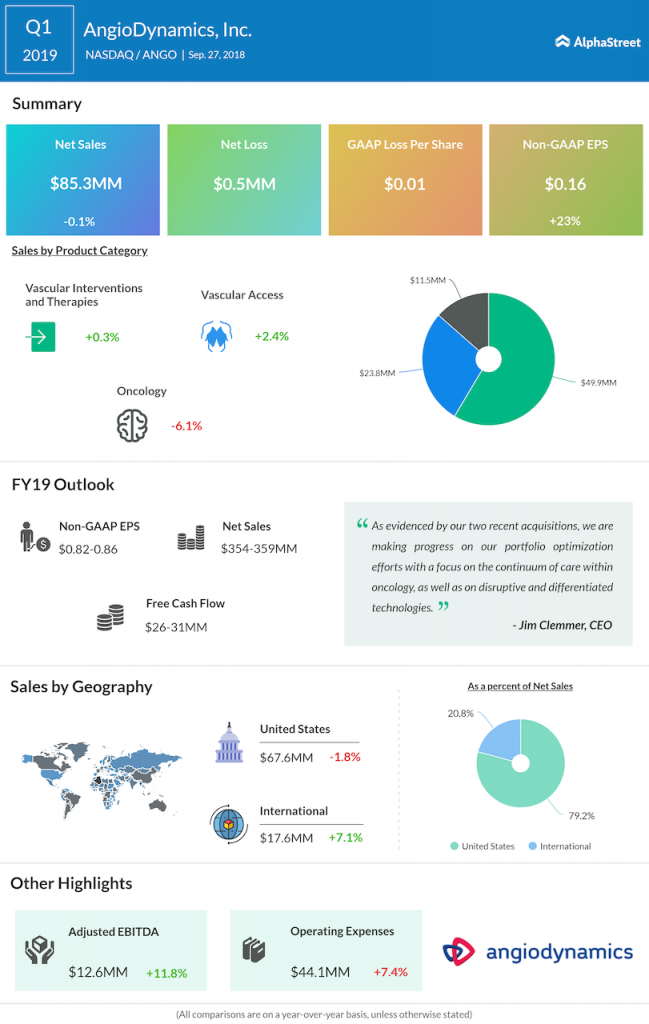 Margins improved 380 basis points, touching 52.1% aided by the facility consolidation efforts and improvement in operations. However, free cash flow slipped to the negative territory of $9.5 million compared to a positive cash flow of $2.5 million last year, which remains a concern.

To beef up its oncology portfolio, AngioDynamics acquired RadiaDyne and BioSentry in the quarter, which is expected to boost its bottom line in the upcoming quarters. The company has paid $87 million as upfront consideration, while $43 million as part of earnouts in future.

As a result of the acquisitions, the medical device maker has revised upwards its fiscal 2019 sales outlook, which is expected to come in the range of $354-359 million over $344-349 million guided last quarter. However, adjusted earnings remain unchanged at $0.82-0.86 per share. Shares of the company have jumped above 35% over the last 12 months and up nearly 46% in 2018.