Apple’s (AAPL) App Store is turning 10 on July 10. The App Store, which was launched in 2008 with 500 apps, is aiming for the sky as about 500 million weekly visitors are spending their time in the store. With apps increasing in all the categories based on the consumers’ need, the number of apps is set to rise further.

The market analysts are expecting global mobile app revenues for Apple to rise from $34 billion in 2016 to $60 billion in 2021. According to Statista, global consumer spending on mobile gaming apps is set to reach $105.2 billion in 2021. With these expectations available, Apple’s profitability from App Store might be doubling in the coming years.

The developers have utilized the facility of circulating their software through the App Store to the people at large and following the guidelines for protecting user privacy. As of June 2018, developers have earned over $100 billion from the App Store after subscriptions climbed by 95% from last year.

Every year at the Worldwide Developers Conference (WWDC), the software developers assemble to discuss the latest developments in apps. According to an App Annie report, Facebook (FB) has been the most downloaded app of all time, and Netflix (NFLX) remained the most favorite app as a lot of people spent most of their time in Netflix app.

As of the first quarter of 2018, Google (GOOGL) Play Store has taken the lead of 3.8 million apps available at the store, followed by Apple App Store with 2 million apps, Windows Store had 669,000 apps, Amazon (AMZN) Appstore had 430,000 apps and BlackBerry World had 235,000 apps, according to Statista. 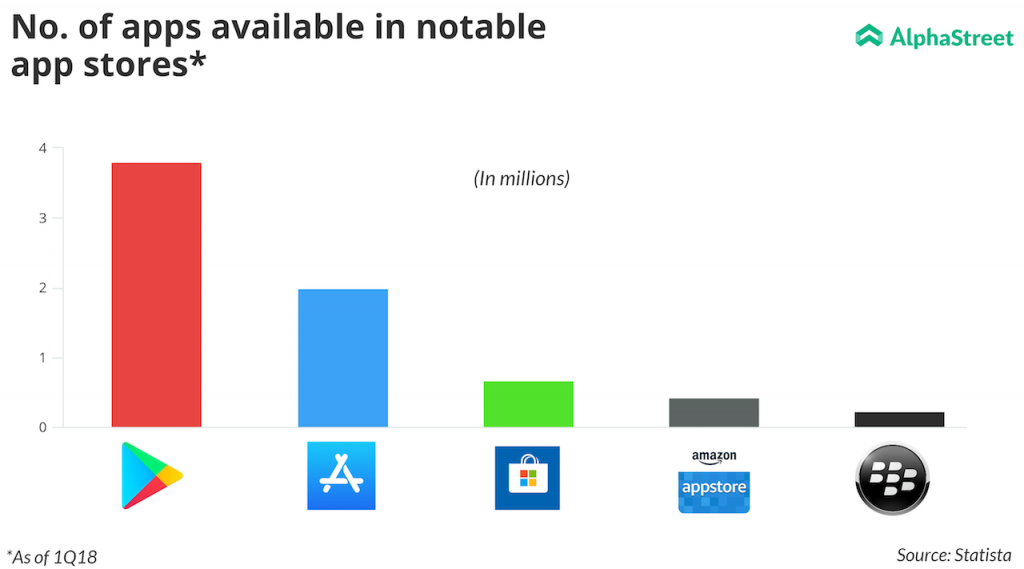 Despite these positive developments in the App Store, the growth of available mobile apps worldwide had fallen considerably from 21.41% in the second quarter of 2015 to -1.23% in the first quarter of 2018. The market analysts expect the growth to move upward in the coming quarters depending on the rise of the companies and their apps.

The future of apps revenue is expected to depend on the adoption of technologies such as the Internet of Things (IoT), 5G, Augmented Reality (AR) and Virtual Reality. Apple has invested heavily in the research and development and IoT popularization as well as in bringing AR capabilities to iOS. It is expected that the App Store will see more changes in the future due to the new adoption of technologies.