Apple chief Tim Cook has a tough job but it comes with perks too!

Apple (AAPL) CEO Tim Cook took charge of the tech giant in 2011 and he is about to get amply rewarded for his job. As part of his annual compensation plan, Cook is set to earn 560,000 Apple shares worth $120 million this Friday. Half of this stock award depends on Apple’s successful outperformance over the majority of stocks in the S&P 500, which the company has achieved.

Over the past 12 months, Apple stock has surged 35% while year-to-date, it has gained 27%. In 2017, Cook received $89 million and based on data from Bloomberg, the Apple chief is currently worth about $700 billion.

The biggest feather in Tim Cook’s cap has to be the $1 trillion market value achieved by Apple earlier this month. Apple has the distinction of being the first US company to achieve this milestone. Under Cook’s stewardship, Apple released Apple Music and Apple Watch. 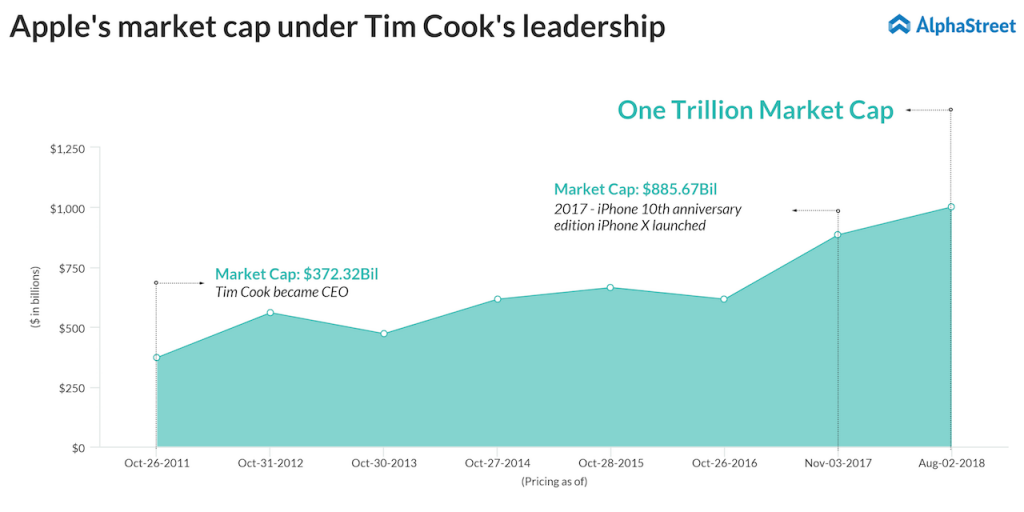 Apple Music reported a year-over-year growth of over 50% in the most recent quarter and currently has 50 million listeners. Apple Watch grew in the mid 40% range during the just-concluded quarter. Cook also successfully helmed the expansion of Apple Pay to reach well over 1 billion transactions.

Under Cook, Apple changed its strategy with regards to the iPhone. The company not only increased the number of iPhones launched in a year but it also brought out a variety of iPhones suited to a broader customer base. During the recently-concluded third quarter, iPhone revenues improved 20% year-over-year.

2018 has been quite eventful for Apple so far with the trade tensions between the US and China threatening the tech company’s revenues. In August alone, the company had its server hacked by a schoolboy and its App Store ran into trouble in China over issues of illegal content.

Related: MILESTONE: Apple is the first trillion dollar US company!