Apple growth story has not ended: Here is why

The biggest achievement attributable to Apple in the recent times was in the form of a device; rather it was the consistency the stock displayed, which even rocked the obstinate ideology of tech-averse Warren Buffett. Not only is Buffett now the proud owner of 165 million Apple shares, the stock makes up his second largest holding.

This unlikely romance was further underscored during a PDA at a recent CNBC interview when Buffett said Apple would be his likely choice if he could pick only one stock. The Oracle of Omaha is apparently convinced that the tech giant would be the biggest beneficiary of the mad rush towards better and more innovative consumer electronic devices.

Recent research reports have also been in favor of the growing Apple fever.  According to a report on wearables market published last week by International Data Corporation (IDC), Apple Watch accounted for over 21% of total worldwide market share in 4Q17. The company was far ahead of its closest competitor, Fitbit, which came at 14.2% for the quarter.  If the IDC estimates are to be believed, Apple Watch’s market share improved over 57% year-over-year, while Fitbit saw a decline of 17%. 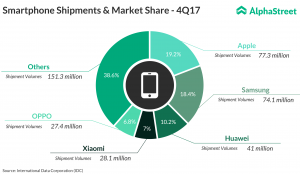 Meanwhile, an IDC report that arrived a few weeks earlier said iPhone shipment volumes grew 19.2% in the fourth quarter, higher than all its competitors. This, complemented by iPhone’s premium pricing, helps the company reach deep into consumer wallets.

The company had hit upon brief investor concerns regarding long-term growth prospects when it reported lackluster smartphone sales and lower guidance in the fourth quarter. Rumor mills immediately started churning stories on how the Apple growth story has finally come to an end. However, over a short period, the stock picked up once again, topping its all-time high on March 9.

Perhaps what is most promising about this company is its foray into the healthcare industry. Apple’s growth in the wearables segment, both in terms of shipment and innovation, puts the company in an enviable position to tap into the $3 trillion healthcare market. Apart from these, Apple’s collaboration with health insurance companies including UnitedHealth Group and Aetna by providing their employees/clients with its fitness devices free or at discounted rates has also helped push its products to a wider audience. 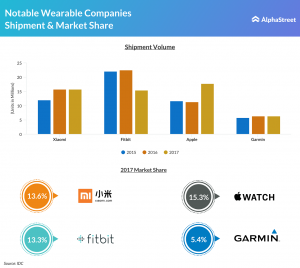 While Apple’s business strategies and high ambitions with VR and AR are to be appreciated, innovation with regards to its present devices seems to have lost a bit of steam. This year, the tech major has AI-enabled speaker Homepod and Apple Pencil set for launch. These are definitely interesting and useful products, but they are also very much in the pipeline of rival companies as well. What we call a breakthrough product is long overdue.

But this hardly bothers analysts, who expect double-digit growth in profit in fiscal 2018. According to the current estimates, Apple profits are expected to jump 24% to $11.43 per share during this period.

The basics are right

Apple has got the basics right. Unlike most of its rivals, Apple has constantly maintained a low PE ratio around 18, and estimates indicate the company will continue to do so. And these are times when companies like Amazon flaunt PE ratios consistently above 300!

Apart from these aspects, the fact that Apple makes up a decent dividend stock should be enough to make it a good buy. Though the yield has not been great, the company has made it a point to hike its dividend every year without fail.

According to Researcher BDVD, Apple is expected to continue to raise its dividend 15% annually for the next five years, besides boosting share buyback to $65 billion.