Applied Materials (Nasdaq: AMAT) stock has surged 42% this year aided by improving macros and better-than-expected second quarter results. The stock touched a new 52-week high of $52 mark in late July backed by the acquisition of Kokusai Electric in July. The chip equipment maker is slated to report its third quarter results on Thursday after the bell.

Last quarter, Applied guided Q3 revenues of about $3.525 billion and adjusted earnings to be between $0.67-0.75 per share. Analysts are anticipating top line of $3.5 billion and non-GAAP EPS of 70 cents per share. Investors would be expecting the company to surpass estimates comfortably in the Q3 period taking into account the Kokusai deal.

The chip equipment maker gets 80% of revenues from the Asia Pacific region, with China being a significant contributor. Apart from China, Korea, Taiwan and Japan also bring in meaningful contribution to the top line. The ongoing trade war between the US and China would be a headwind impacting China’s performance. 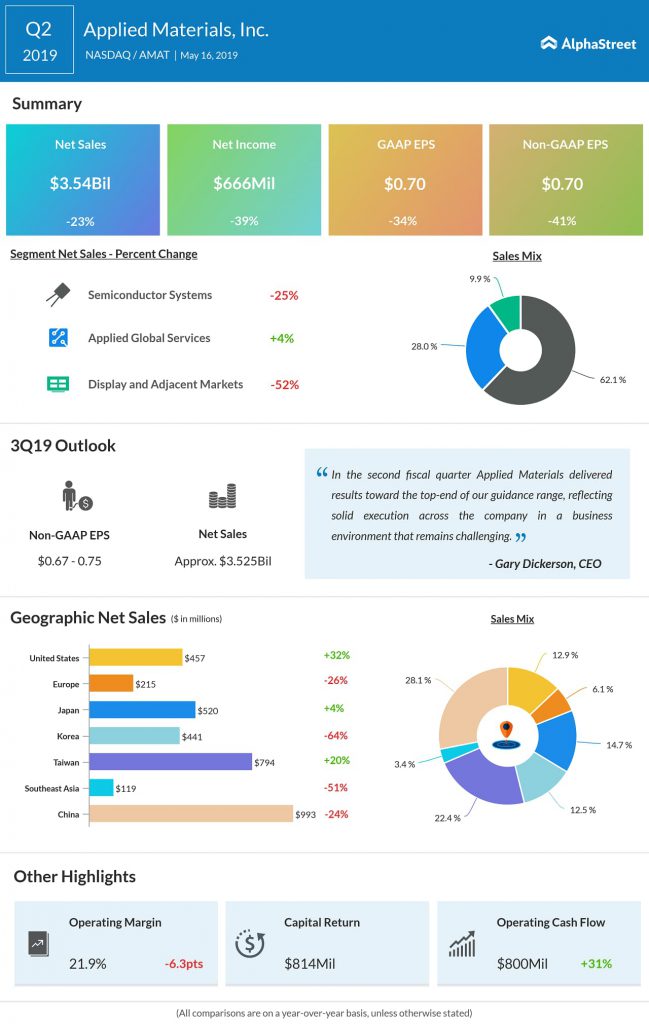 In the first half of 2019, four customers (Taiwan Semiconductor Manufacturing Company (TSMC), Intel Corporation (INTC), Toshiba, SK Hynix) accounted for 49% of total sales. Hence, the customer concentration would play a major factor in the performance of the chip equipment maker.

Applied Materials announced in July that it’s buying Kokusai Electric from Kohlberg Kravis Roberts (KKR) for $2.2 billion. The company also added that the deal would be immediately accretive to adjusted earnings upon closure. Applied expects the acquisition to be completed within 12 months post regulatory approval.

Kokusai’s wafer equipments are helpful in processing chips which are used in high-growth areas like self-driving cars, IoT, and artificial intelligence. In addition, it offers batch processing systems which help chipmakers to manufacture multiple chips based on demand simultaneously. This complements well with the Applied’s single-wafer processing systems.

This deal also helps Applied to up the ante on the high-growth markets like artificial intelligence, 5G network deployment and autonomous driving, which are expected to witness huge demand in the near future as chipmakers are expected to see improved macros in the latter half of the year.

Applied reported 23% drop in revenues and 41% decline in adjusted EPS due to weak industry macros resulting in muted performance from its semiconductor and display segments. However, the second quarter results came ahead of estimates. From a geography perspective, the US and Taiwan saw double-digit sales growth hampered by weak sales from other regions.

PEP Stock: Is PepsiCo a safe investment in the bear market?

PepsiCo, inc. (NASDAQ: PEP) is among the few companies that have successfully weathered both the COVID-19 crisis and economic recession. Demand for the snack and beverage giant’s popular products remained