Last week, AT&T (NYSE: T) sold its stake in on-demand video provider Hulu to the majority shareholders, leaving the market speculating about the future of its streaming service. The sale came at a time when the streaming sector is witnessing intense competition with the entry of new players like Disney+ (DIS). Currently, AT&T is gearing up to take on rivals with the recently acquired WarnerMedia, which is being reorganized with focus on video streaming.

The Dallas, Texas-based company is all set to unveil its first-quarter results Wednesday before the opening bell. Market watchers see a 19% growth in revenues to $45.11 billion in the March quarter – mainly reflecting the inputs from WarnerMedia – but forecast a one-cent decline in earnings to $0.85 per share.

The stable demand for its wireless services and the recent revision of TV packages, with a favorable pricing structure, bode well for the company in terms of revenue generation.  The top-line will also benefit from the new business model with focus on improving advertising content and data analysts. 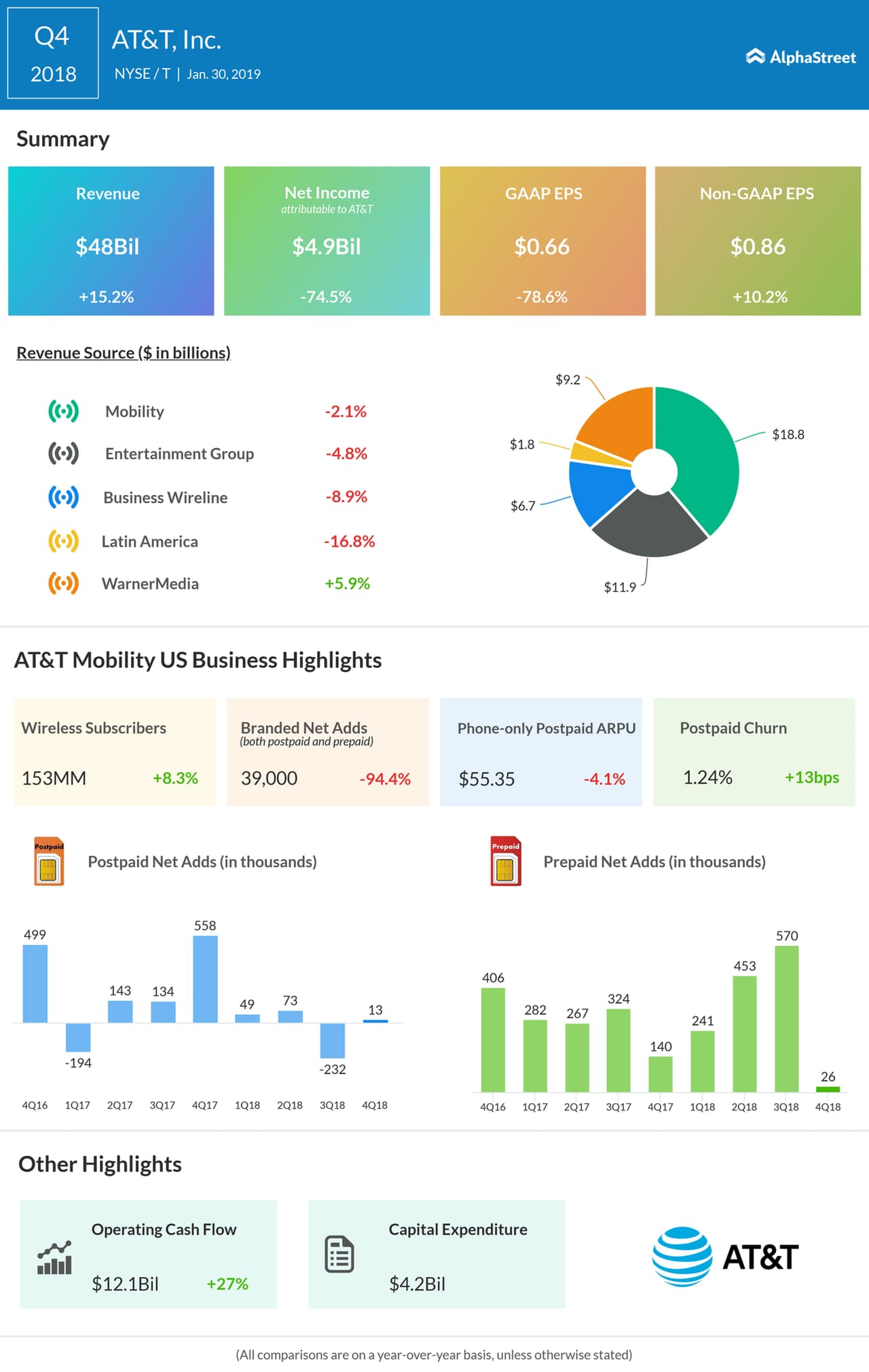 High operating expenses could be a drag on the bottom-line, including those related to acquisitions, as the world’s largest telecommunications firm looks to establish itself as a telecom-entertainment company. However, the main area of concern is the depletion of the company’s post-paid subscriber-base in recent quarters, which is expected to continue in the to-be-reported quarter, in contrast to the solid additions seen a year earlier.

In the December quarter, AT&T registered a double-digit increase in earnings to $0.86 per share, which topped analysts’ forecast by a penny. Supported solely by contributions from WarnerMedia, revenues climbed 15% to $48 billion. The company’s main business segments suffered from muted subscriber addition, especially the linear TV service.

You may also like: AT&T Q4 2018 Earnings Conference Call Transcript

After recording strong cash flow growth and launching a debt reduction program last year, the management is planning to take forward the initiatives to strengthen the balance sheet further. The majority of the analysts following AT&T are bullish about the company’s market value. They have given the stock buy rating, with a consensus price target of $35.

Shares of AT&T witnessed significant volatility in the past twelve months when they lost about 3%, moving closer to the $30-mark. However, the stock had a positive start to 2019, and moved up 8% so far, outperforming the market.