The world’s largest telecommunications company, AT&T (NYSE:T), Wednesday reported 15.2% jump in fourth-quarter revenue to $48 billion, partly helped by the Time Warner acquisition. Earnings for the quarter rose to 86 cents per share from 78 cents per share a year ago.

Analysts had projected earnings of 85 cents per share on a top line of $48.42 billion. 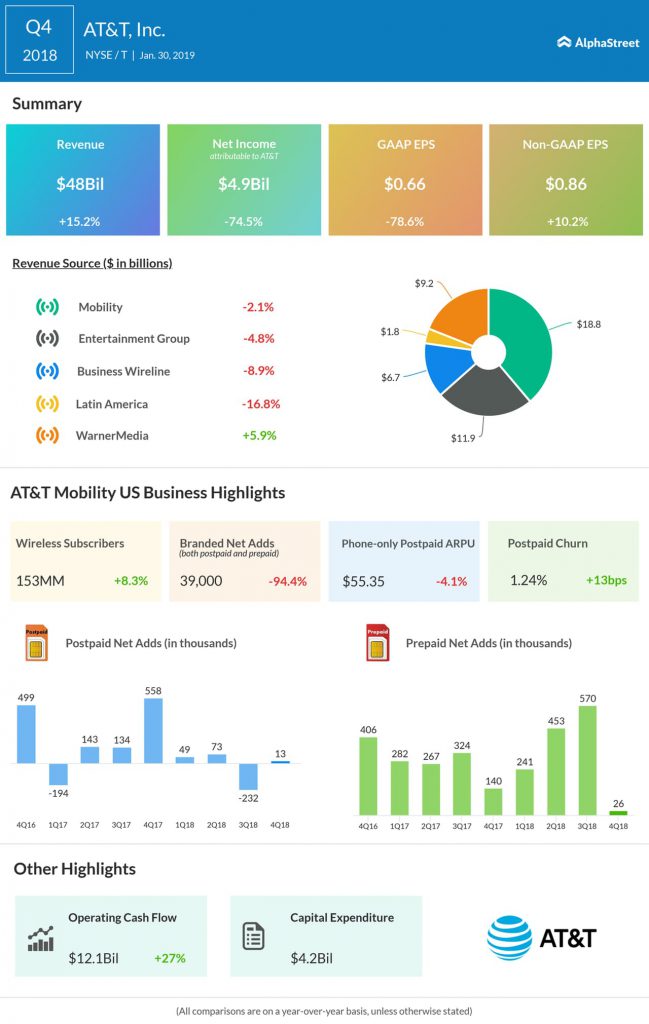 The slight top-line miss sent AT&T shares down 2.2% during pre-market trading. The stock has seen an 18% decline in the past 52 weeks, as investors remained concerned over a continuous drop in linear TV subscribers.

Total wireless net adds were 3.8 million, with 2.8 million coming from the US, driven by smartphones and connected devices.

The company, which has been trying to establish itself as a telecom-entertainment firm through a slew of acquisitions, said it expects adjusted EPS growth in low single digits in 2019. Free cash flow is projected to be in the $26 billion range.

CEO Randall Stephenson said, “Our top priority for 2018 and 2019 is reducing our debt and I couldn’t be more pleased with how we closed the year. In 2018, we generated record free cash flow while investing at near-record levels.”

EBITDA in the Communications segment increased 6.7% in Q4, though in the Entertainment Group, it fell 9%.