Autodesk (ADSK) reported its first-quarter results after the closing bell. The quarterly results topped analyst estimates both on revenue and earnings front. The company’s revenue increased 15% to $560 million and adjusted earnings came in at $0.06 per share compared to $0.16 loss in the prior-year period, driven mainly by strong recurring revenues.

However, stock price is down nearly 5% in the extended hours of trading due to weak earnings outlook provided for the current quarter.

Annualized recurring revenue (ARR), one of the important metrics tracked by investors, rose 22% to $2.13 billion. The company expects to grow its ARR by 28% to 30% for the fiscal year and also plans to add 500,000 to 550,000 subscribers. Recurring revenue improved to 95% in the quarter compared to 90% in the prior year period.

Subscription revenue more than doubled to $350.4 million, which contributes over 65% to the top line. Total subscribers for Autodesk at the end of first quarter stood at 3.82 million, which is an increase of 101,000 users from fourth quarter. 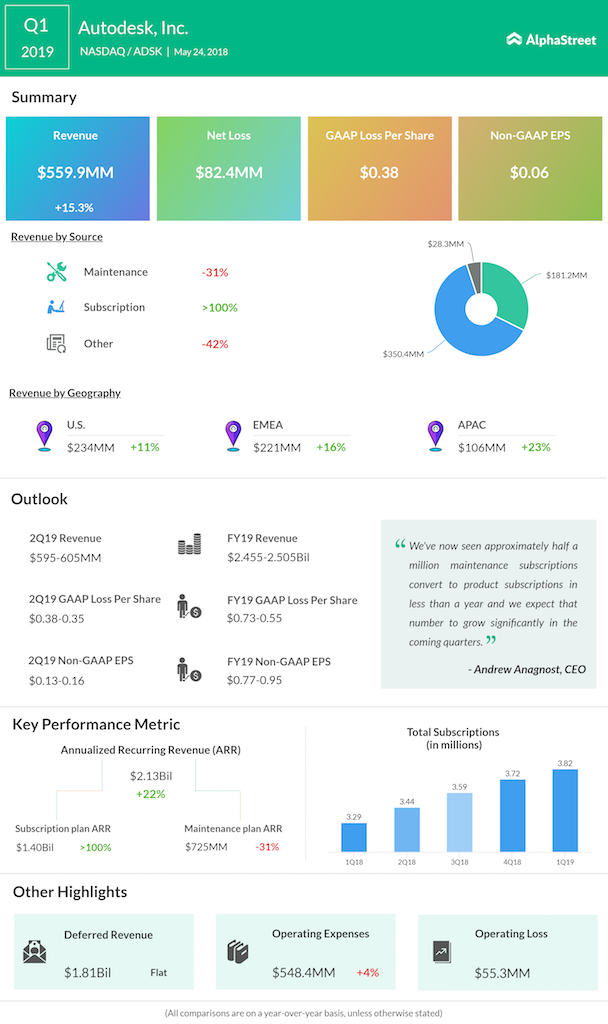 The company’s strategy to shift to subscription model seems to be bearing fruit. Number of users under subscription plan now stands at 2.57 million, up 307,000 compared to last quarter. This also includes 154,000 users who converted from maintenance program due to the ongoing transition efforts.

Commenting on the ongoing transition, CEO Anagnost said, “We’ve now seen approximately half a million maintenance subscriptions convert to product subscriptions in less than a year.”

It’s worth noting that Autodesk started its transition two years ago as it was under pressure from hedge funds to improve its performance and reduce costs. Last year Andrew Anagnost took over the mantle from Carl Bass to bolster the performance, which has been received well by the investors. In the last 12 months, stock price is up nearly 24%.