In the second cryptocurrency theft of the month, Seoul-based exchange Bithumb on Wednesday said about $30 million worth of digital currency was stolen from the platform. Following the theft, Bithumb temporarily suspended withdrawal and deposit of funds. Only a couple of weeks ago, South Korean exchange Coinrail had reported the theft of cryptocoins including Pundi X by hackers.

Despite the heavy security standards of the blockchain system, cryptocurrency thefts have been happening ever since 2011. And the recent back-to-back robberies are currently hammering cryptocoins, which have already lost the lion’s share of their values since the end of last year. Following Wednesday’s Bithumb theft, Bitcoin fell 2.3% $6,561.79, as per Coindesk.

Last month, Anti-Phishing Working Group published a report that put into perspective the magnitude of the digital currency thefts. According to the report, a staggering $1.2 billion worth of cryptocurrencies have been stolen since January 2017. It also adds that only a fifth of this amount has been recovered by law enforcement authorities, who are struggling to cope with the rising number of similar cases. 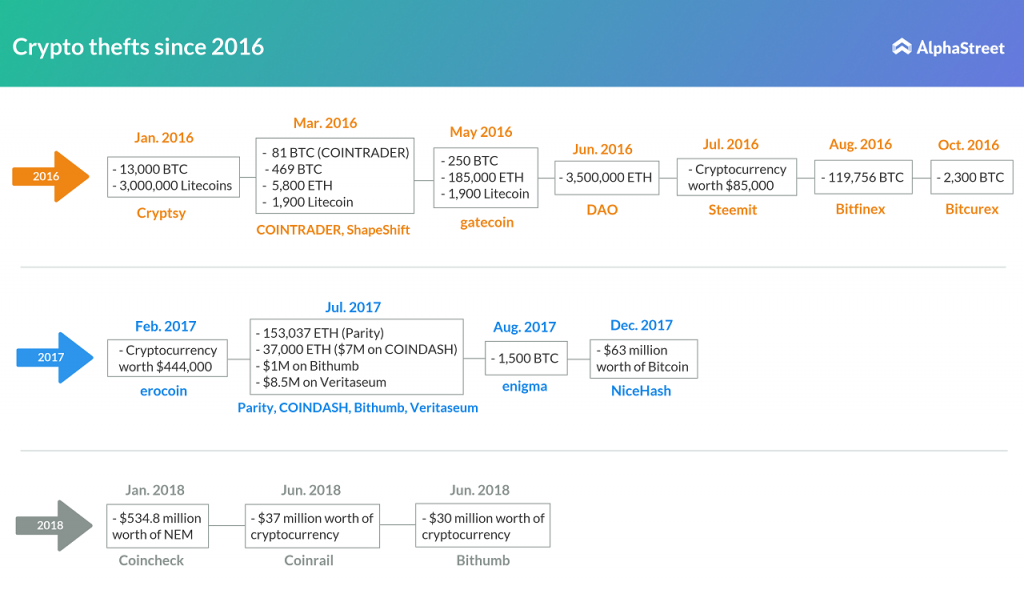 In January this year, we saw one of the most massive thefts, when from Tokyo-based Coincheck exchange was compromised and NEM coins worth about $500 million were moved to an unidentified location. Though many hackers target storage wallets, about 80% of the thefts so far have happened at exchanges, a recent study reveals.

The most shocking aspect of these thefts is the fact that hacking tools are readily available in the dark web for as low as $300! “There are currently an estimated 12,000 dark web marketplaces selling approx 34,000 offerings related to crypto theft,” a report by Carbon Black says.

Though sham advertising campaigns and phishing attacks are some of the widely used methods by hackers, not all thefts happen online.  There have been cases were individuals were kidnapped by criminals and threatened to reveal information about their digital wallets. Once the data is obtained, coins are transferred to their own secret locations.

Meanwhile, the new GDPR regulation that came into effect last month in the European Union is also said to be inadvertently aiding hackers. The regulation, which limits access to user data, is set to make probe into crypto thefts a lot more difficult for law enforcement agencies.

Going by the current standards, it may as well be said that your digital currency portfolio is no safer than the money in your wallet!