Bank jobs are at stake as automation grips the sector

After the manufacturing sector, automation is set to eat into jobs in the banking sector as well. Citigroup is reportedly planning to axe as many as 10,000 jobs from its investment banking segment in the next five years by automating areas that require little human interference.

During an interview with Financial Times, the bank’s institutional clients group CEO Jamie Forese claimed that operational roles that constitute for nearly 40% of the total employees were the most fertile for machine processing. Stressing on the number, he stated that the company plans to reduce its 20,000 operational roles to 10,000 over the next five years. 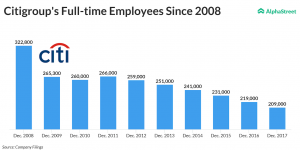 Last year, McKinsey Global Institute released a report stating automation could eliminate nearly 73 million US jobs by 2030. For decades, automation and robotics were used primarily in manufacturing, but it is now gradually taking hold of the banking industry as well. This is because computers are more accurate and quick in calculating numbers, and the jobs that are at risk primarily include those with repetitive tasks.

For quicker turnarounds and better efficiency, banks are pushing the boundaries of technology. Investment management company Jones Lang Lasalle (JLL) said, in about five years, the number of US bank branches will reduce by almost 20%, saving almost $8.3 billion annually.

Citigroup’s warning about layoffs echoes that of Deutsche Bank. A month ago, the German lender had announced plans to cut about 10,000 jobs by 2019 to reduce expenses.