The US home decor retailer Bed Bath & Beyond (BBBY) reported a beat on the top line results, while posted in-line bottom line results for the first quarter of 2018. Sales were almost flat for the quarter, inched up 0.4% at $2.75 billion. In the final quarter of 2017, Bed Bath had reported one of its highest revenue growth quarters in the last four years of 5%.

Earnings, on the other hand, declined drastically by 42% year-over-year to $43.5 million. The results were hurt by comp store sales declines, lower traffic in stores, higher expenses and lower revenue. The retailer’s comparable sales declined for the fifth consecutive quarter, down about 0.6% in the quarter. 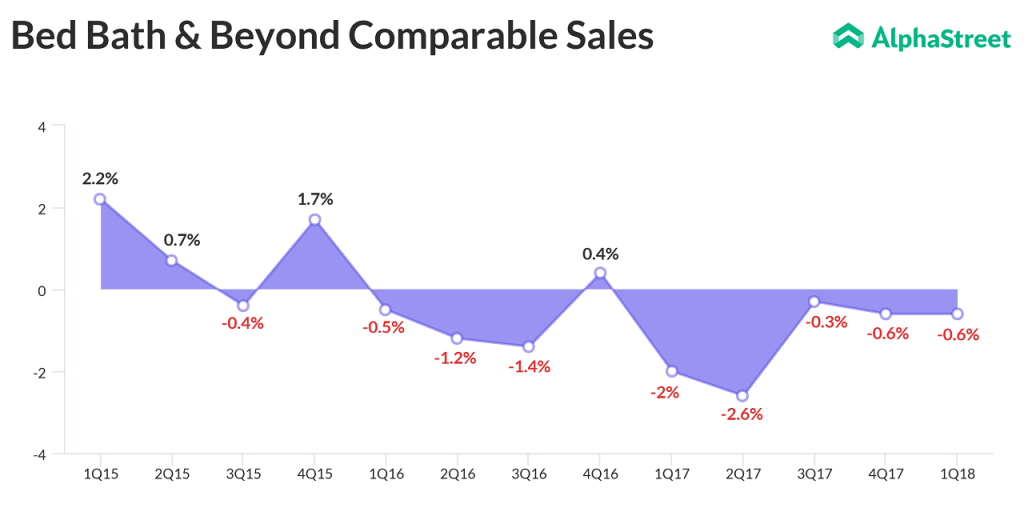 The Board of Directors declared a dividend of $0.16 per share to the company’s shareholders on record as of September 14, 2018. This is an increase of 6.6% from the same period a year ago.

The New Jersey-based retailer repurchased about $22 million of its common stock, representing about 1.2 million shares, under its current $2.5 billion share repurchase program. By the end of the quarter, the company’s cash and investment balances increased by $281 million to $847 million.

Shares of the retailer plunged more than 5% in after-hours trading on the dismal comp store numbers. The stock has been declining from poor to worse in the past one year, dipping about 34%, while falling about 8% since the beginning of this year.