Tax-related gains helped Valeant Pharmaceuticals stay in the positive territory during the fourth quarter, despite a marked decrease in revenues that came in below estimates. Excluding special items, adjusted earnings declined compared to last year. On a downbeat note, the company now forecasts full year revenues below its previous expectation.

The Bausch + Lomb division, the main revenue driver whose performance is being closely watched by investors, registered a modest decline in revenues. Meanwhile, the company’s continued efforts to reduce investments and debt resulted in a 4% organic revenue growth in the core business. 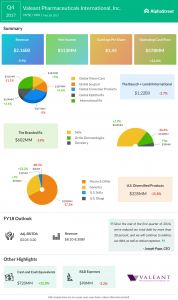 “Since the end of the first quarter of 2016, we’ve reduced our total debt by more than 20%, and we will continue to address our debt, as well as reduce expenses,” said Valeant CEO Joseph Papa.

Earnings for the fourth quarter were $1.45 per share, which marked a significant improvement from the $1.47 per share loss reported in the same period last year. The turnaround is attributable to an income tax benefit of $1.32 billion. In contrast, fourth quarter revenues decreased 10% to $2.16 billion from the corresponding period of 2016.

Valeant is currently looking for fiscal 2018 revenues in the range of $8.10 billion to $8.30 billion and non-GAAP EBITDA between $3.05 billion and $3.20 billion, well below analysts’ forecast.

Among competitors, pharmaceutical firms Allergan and Merck reported higher sales and earnings for their most recent quarters.

On Tuesday, Valeant signed an exclusive agreement with Kaken Pharmaceutical for development of a potential psoriasis drug and commercialization of the same in the U.S., Canada and Europe.

Following the release of the earnings data, Valeant ‘s stock lost more than 3% in pre-market trading.