The pharmaceutical industry has been witnessing hectic activity for some time, with most drug makers either channelizing their resources for vaccine development or engaging in COVID care programs. Biotechnology giant Biogen Inc. (NASDAQ: BIIB) seems headed for a mixed fiscal 2021 amid generic competition and favorable regulatory action.

The pharma company, headquartered in Massachusetts, has been feeling the pinch of its blockbuster multiple-sclerosis drug Tecfidera losing market share to generic counterparts, lately. However, brightening the company’s future prospects, the FDA has granted accelerated approval for its Alzheimer’s formulation Aduhelm – the brand name for Aducanumab that faced regulatory issues earlier — after advanced stage studies on the efficacy of the drug yielded positive results.

The green signal from FDA, which also triggered a controversy among experts and the pharma fraternity, allows the company and its Japan-based associate Eisai to market and sell Aduhelm. It has been around two decades since an Alzheimer’s formulation got approval, which makes the latest FDA action significant. But, there is a catch — the company is required to prove the drug’s long-term efficacy by conducting further studies for FDA’s evaluation.

Biogen’s shares rose a whopping 55% soon after the announcement earlier this month and maintained the momentum since then, which was probably its biggest intra-day gain ever. While the FDA nod has come as a morale booster for the company and its stakeholders, the dispute over the drug’s efficacy could be a drag on investor sentiment until it is proved beyond doubt. Going by the bullish target price, BIIB has what it takes to return good value to shareholders for the foreseeable future. 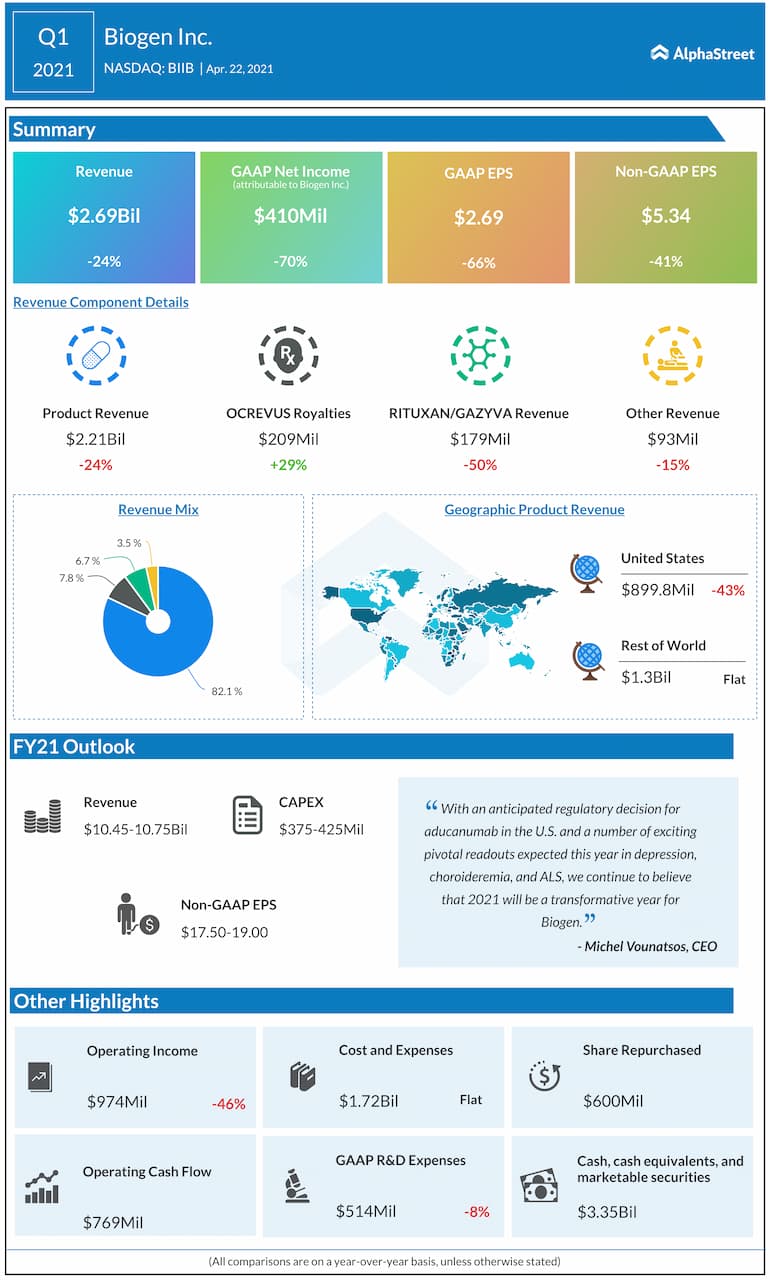 The company’s sales should get a major boost from the growing demand for Alzheimer’s drugs capable of reducing cognitive impairment in patients. Last year, Biogen suffered a major setback after Aducanumab failed in a regulatory evaluation, which came as a double whammy for the company that was already hit by the loss of Tecfidera’s exclusivity.

“Biogen continues to demonstrate resilience and strong execution in the first quarter of the year, and we believe we remain on track to make 2021 a transformative year for the company. This of course starts with the potential approval of aducanumab in the US. The unmet need and cost to society for Alzheimer’s disease are tremendous and mounting. Alzheimer’s creates a cost burden of over $600 billion per year in the US and the cost for caring for an Alzheimer’s patient can be over $0.5 million.”

Biogen has been experiencing weakness in its earnings performance since early last year, reflecting the continued softness in sales. Extending the downtrend, adjusting profit dropped 41% to $5.34 per share in the first quarter of 2021. But the bottom-line topped expectations, after missing in the previous quarter. At $2.7 billion, revenues were down 24% but above the market’s projection. During the quarter, the multiple sclerosis segment contracted, hurt mainly by the dismal performance of Tecfidera.

The company is scheduled to unveil second-quarter data on July 22. Experts see earnings more than halving to $4.57 per share on revenues of $2.61 billion. Though Biogen’s shares have slipped below the $400-mark once again, paring a part of the gains that followed the recent rally, they continue to trade above the 52-week average. The stock closed the last session at $374.40, up 46% from the levels seen six months ago.