Here are two attractive dividend stocks that you should not miss

Investors usually focus more on income stocks in times of uncertainty and the trend was evident during the coronavirus pandemic. Take a look at these high-yield dividend stocks that have the potential to create long-term value.

General Mills (NYSE: GIS) is a top-performing Wall Street stock that has a dividend yield of 3.3%, which is among the best in the industry. The grocery retailer has raised its dividend consistently in recent years. The company that owns popular brands like Pillsbury and Cheerios — operating for nearly a century — is an all-time favorite of investors. Though the stock has bounced back from the recent lows, after entering the year on a low note, it remains affordable.

If the valuation moderates further, it could have a positive effect on the yield. The strong fundamentals and resilient business model, combined with decent pay-outs, make it a good bet. The pay-out ratio is likely to grow in the coming months if the company’s impressive dividend history is any indication. Last month, General Mills paid $0.51 per share, which was raised from $0.49 last year. 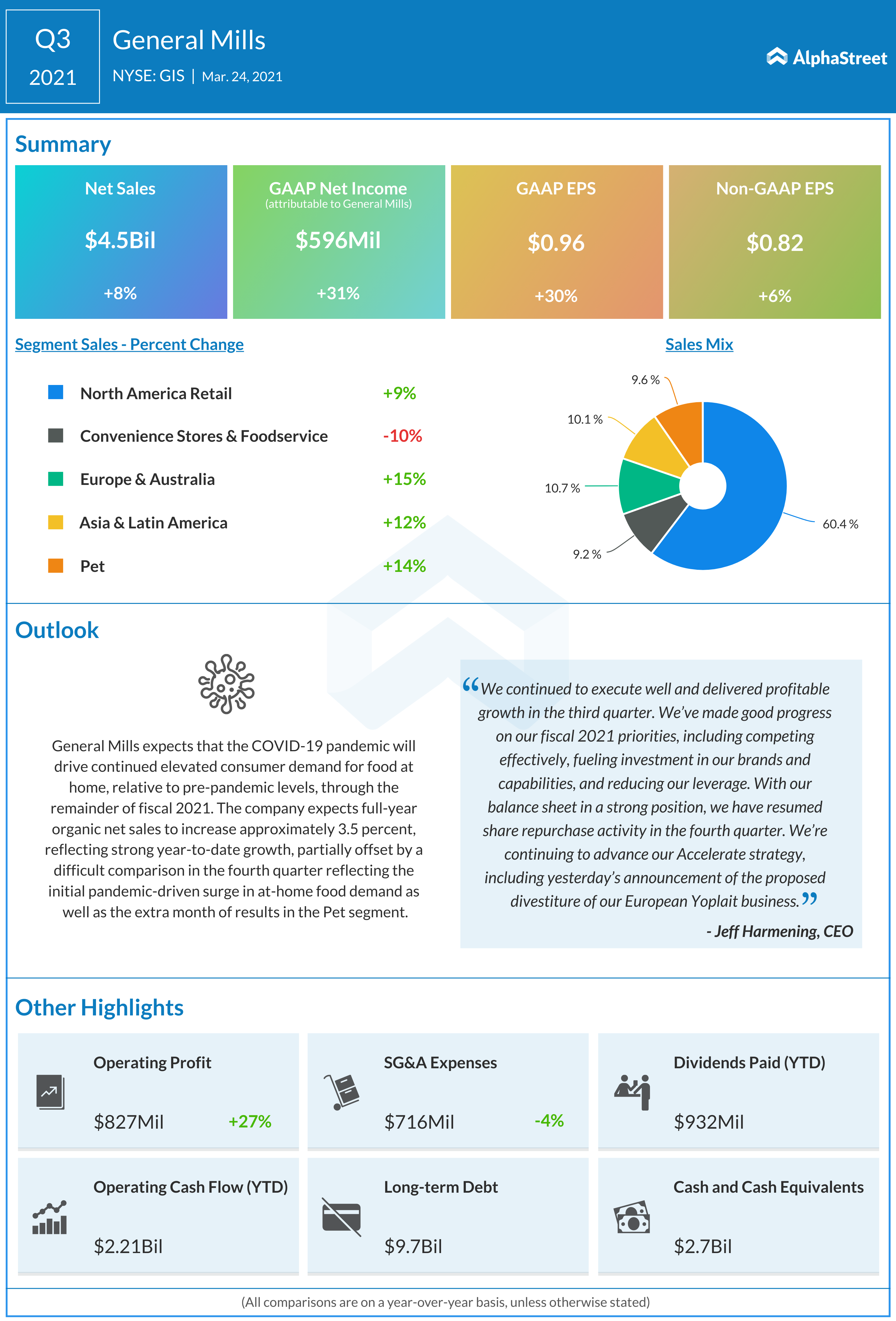 The company’s financial performance has been stable during the crisis period, despite the widespread disruption. In the third quarter, all the key operating divisions registered growth, riding the elevated demand for food-at-home during the crisis as people continued to avoid eating out. Earnings grew 30% to $0.96 per share, on revenues of $4.5 billion.

The stock is currently trading close to the levels seen twelve months ago, after experiencing volatility during that period. It has gained about 3% since last year and analysts expect the uptrend would continue for the remainder of the year.

The Coco-Cola Company (NYSE: KO) has been a much sought-after stock among income investors. The soft drink behemoth has an impressive track record of dividend hike and offers a yield of about 3%, which is more than double that of the average yield of S&P 500. Interestingly, the company has paid dividends regularly for more than a century. Besides, KO’s resilience to the recent shift in people’s consumption habits and macroeconomic headwinds, including the COVID crisis, underscores the strength of its balance sheet.

The company has grown far beyond the popular Coke brand and the portfolio currently includes a diverse mix of products ranging from tea and coffee to juices and plant-based beverages. It is almost certain that the company would continue raising its dividend in the foreseeable future. 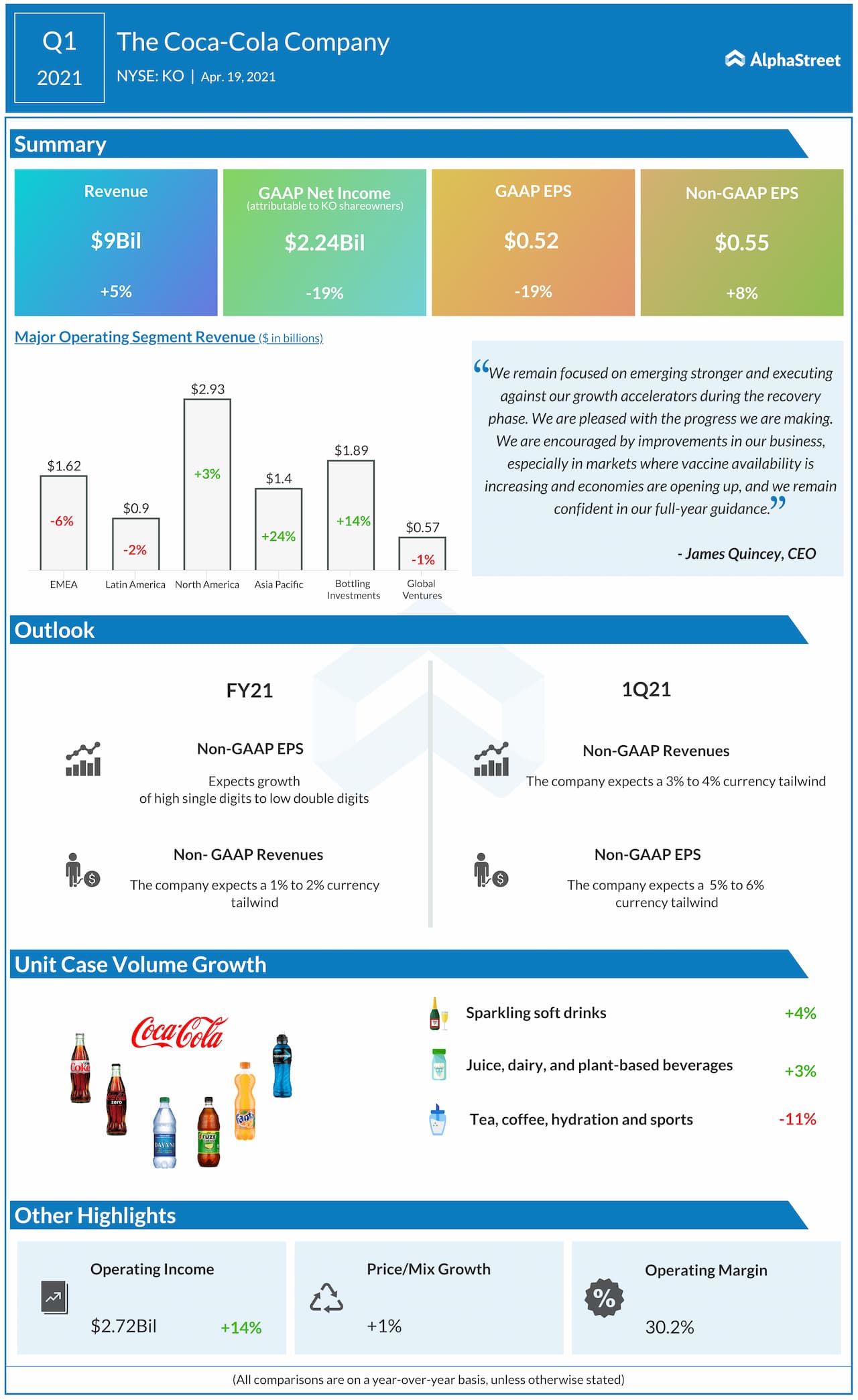 Coca-Cola’s earnings and revenues either beat or matched the estimates over the past several years and it was no different in the most recent quarter. Benefitting from the vaccine-driven market reopening, sales grew 5% to $9 billion in the first quarter, driving up adjusted earnings by 8% to $0.55 per share.  The bottom-line also exceeded analysts’ forecast as demand almost returned to the pre-crisis levels.

After slipping to a three-month low in January, Coca-Cola’s stock has recovered steadily and is currently hovering close to last year’s record high. At $52.29, the stock closed the last trading session slightly lower.