BlackRock Inc. (BLK) reported a 16% increase in its first-quarter 2018 revenues to $3.5 billion, ahead of market expectations. Earnings on a GAAP basis rose 27% to $1.08 billion or $6.68 per diluted share compared to the prior-year period. Adjusted earnings came in at $6.70 per share, beating market estimates. Shares rose over 2% premarket.

The year-over-year revenue growth was driven by base fees and technology and risk management revenues while the EPS growth was fuelled partly by the lower tax rate.

Assets under management climbed to over $6.3 trillion. Global iShares ETFs dropped 46% to $34.6 billion hurt by market volatility fuelled in turn by inflation and trade war concerns. The ETF business is likely to see softness in growth going forward.

During the quarter, the asset manager saw large inflows as well as outflows from institutional clients due to market volatility and the tax reform.

BlackRock has been on the radar in an environment where the focus on gun stocks and gun control is increasing. The money manager, which has a majority stake in many gun companies, has been facing pressure to use its position to bring in effective rules for gun safety. The company indicated that it was time for action on the issue of guns and it is likely it might take steps in this direction.

Earlier this month, BlackRock said it would bring out two new ETFs and a series of index-tracking products for pension and retirement plans that would exclude stocks of gun makers and sellers. 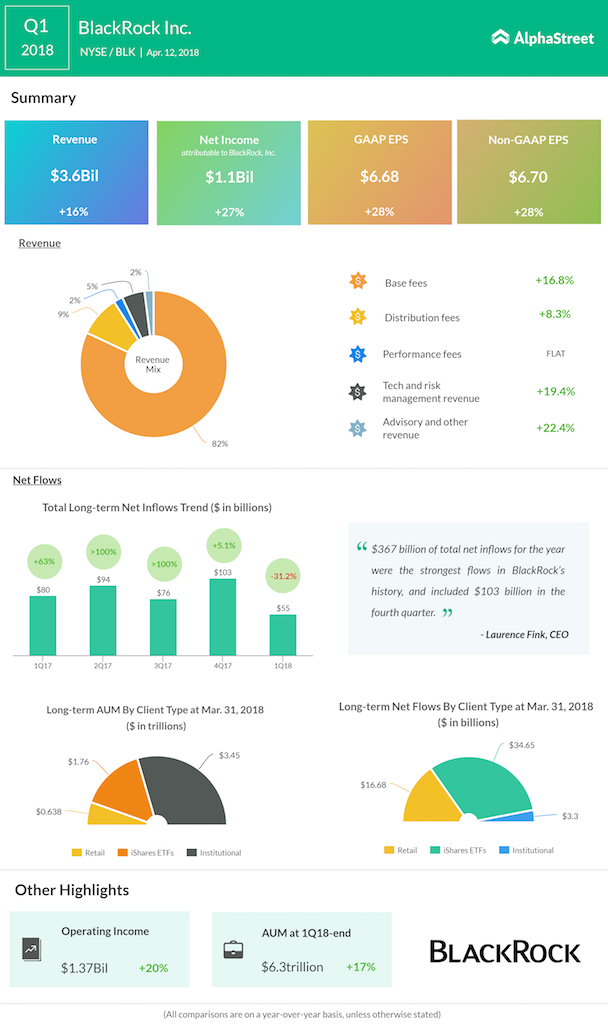