Meal-kit subscription company Blue Apron Holdings (APRN) witnessed a 20% fall in its net revenues during the latest first-quarter earnings. This fall in revenue was mainly due to the decrease in customers and orders following the deliberate pullback in marketing spend in the second half of 2017.

However, net revenues improved 5% sequentially, reflecting the company’s efforts of scaling back its marketing efforts and enhancing merchandising capabilities. The company’s stock surged 9.52% during the pre-market trading following the quarterly results. This year so far the company’s stock fell nearly 48%. 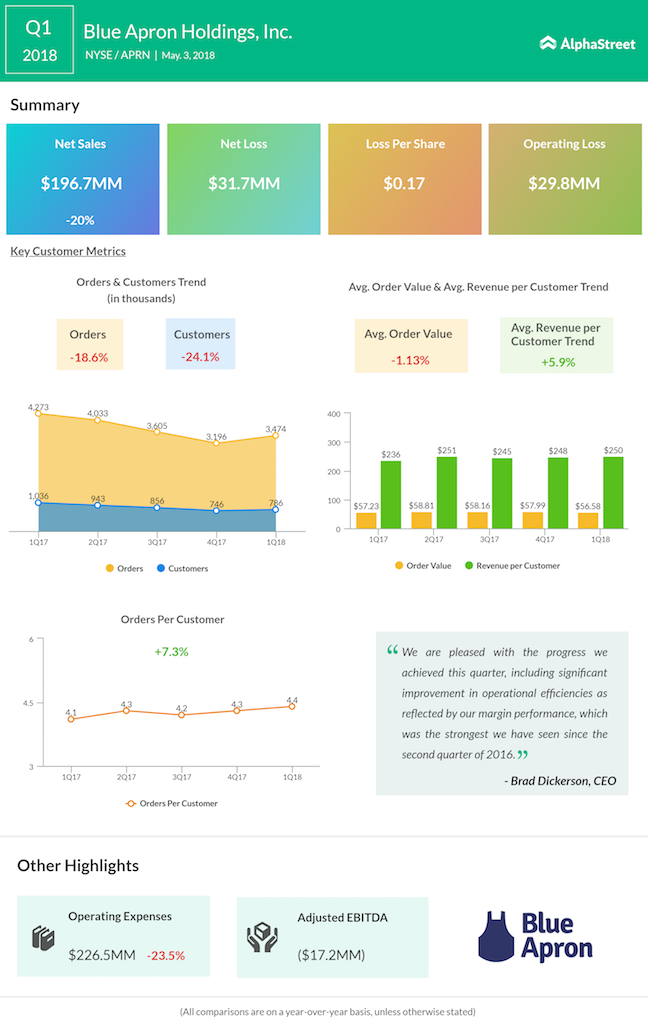 Life on the public market for the New-York based company was filled with struggles. In fact, it was also seen as one of the worst-performing IPOs in 2017. The company that became the household name of delivery meal kits, not only has to fight against corporate giants like Amazon Fresh (Amazon’s (AMZN) online grocery store), Tyson (TSN), and Walmart (WMT), but also certain regional chains like Krogers (KR) and local grocers.

The company that is in the midst of a major business transition, is working aggressively to fix one of its biggest problem, i.e., loss of customers. The company is not just struggling to retain its old customers but also fails to attract new customers.

To boost the customer growth, the company plans to offer more beef in its meal kits. It has also partnered with trendy clean-eating experts atWhole30 to create eight weeks of Whole30-approved recipes for its customers.  Blue Apron, recently partnered with Airbnb to offer global culinary experience to home cooks across the country.

Blue Apron has also launched a new pilot program with Costco (COST),  to expand its reach to more households across the country. Under the leadership of its new CEO Brad Dickeson, the company is seen investing heavily in marketing and partnering with major brands with a hope to attract various customers. Dickerson hopes to keep up this momentum going.

“We also improved our customer metrics as we began to methodically reaccelerate marketing late last year, with a specific focus on attracting new customers with high affinity as well as deepening our engagement with current customers,” said Dickerson.