Boeing, General Electric to be worst hit by the nuke-deal exit

In 2015, when then-President Barack Obama agreed to lift the sanctions on Iran in return for curbs on the country’s nuclear ambitions, US companies were elated by the opening up of a new market with a population of over 80 million. Major firms were quick enough to grab a piece of this pie, signing deals and making investments. Hardly would they have imagined that the sanctions will be replaced within a span of just three years.

All companies – primarily those operating in the industrial, energy and transportation sectors — that have operations or investments in the Middle-Eastern Muslim country are set to face the music of this new move. But the worst hit in the US would be two companies, Boeing (BA) and General Electric (GE).

Boeing, as well as its European counterpart Airbus, will together lose deals worth about $40 billion as both the companies had obtained licenses to sell passenger aircraft to Iran. These licenses are now expected to get revoked, according to US Treasury Secretary Steve Mnuchin. The deal that Boeing signed under the nuclear accord in December 2016 is valued at around $17 billion. 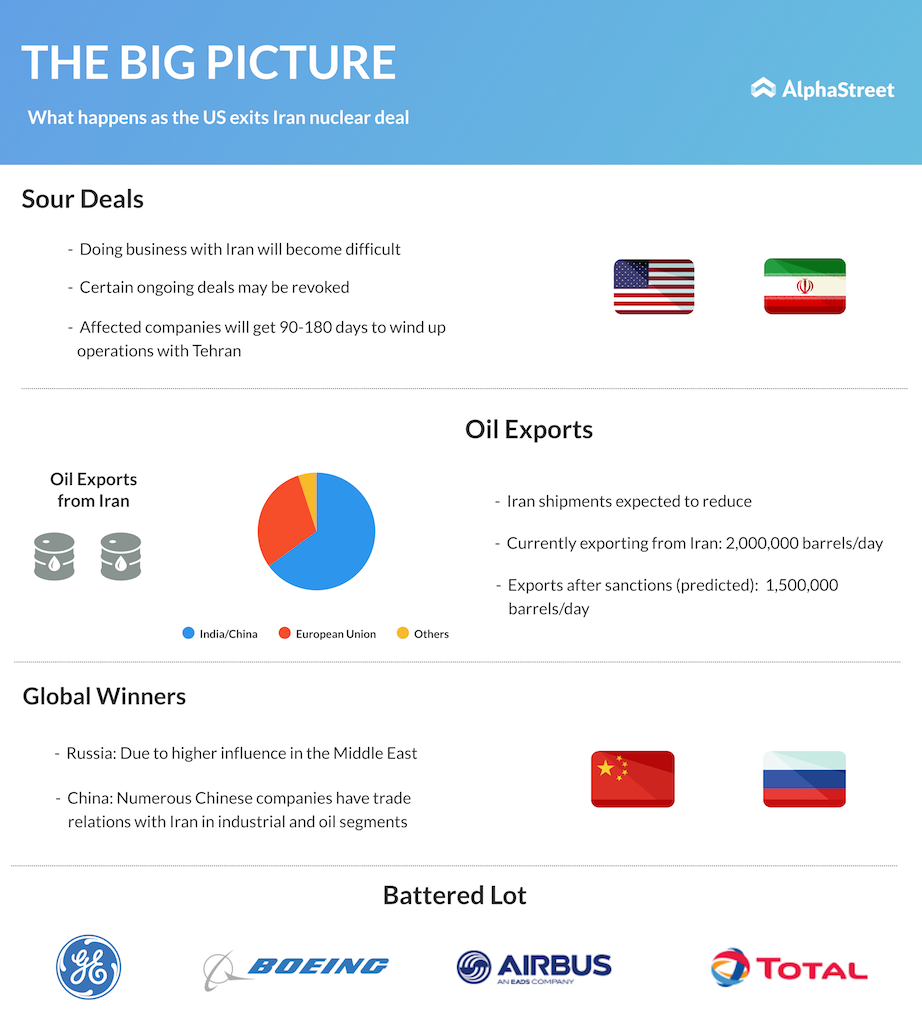 An order for 200 passenger flights was made by Iran Air, but since 10% of the manufacturing parts come from US companies including General Electric, United Technologies (UTX) and Rockwell Collins (COL), licenses have to be obtained from the US Treasury Department. This is why even the deal with Airbus is currently in a limbo.

In early April, GE stock hit a 20-year low, and exactly when we were hoping that things can’t get further worse with General Electric, this happens. Not only is GE a major supplier of parts for Airbus, it also supplies big parts to Iranian oil and gas firms. The orders for these supplies are also likely to get revoked. All the companies will be given 90 to 180 days to break all trade interactions with Tehran before the sanctions are put in place.

Besides Airbus, other global giants that are expected to bear the brunt of President Donald Trump’s decision to exit the “rotten deal” include Total, Volkswagen, BP and PSA Group.