Booking.com parent Booking Holdings Inc (BKNG) is expected to post its fourth-quarter 2018 earnings on Feb. 27 after the closing bell.

The travel itinerary giant has already beaten estimates in three out of four quarters — the one it fell short being the previously reported period.

For Q4, analysts estimate earnings of $19.39 a share on revenue of a little over $3 billion — hinting at about 15% year-over-year jump in both bottom line and top line.

Investors will be closely watching its international top-line growth — where the company’s chunk of revenue comes from, especially through its agency model.

Back home, Agoda and Rental Cars, respectively at agoda.com and rentalcars.com, are expected to boost merchant revenues. Robust operational measures are said to benefit the latter, while the former could see growth due to discounting.

For the to-be-reported quarter, room night growth is expected to see robust growth despite fierce domestic and international competition. Room night booked are expected to grow between 9% and 12%, while gross bookings are touted to jump 6-9% from last year.

The travel giant posted a 7% rise in earnings, while revenue grew 9.5%. 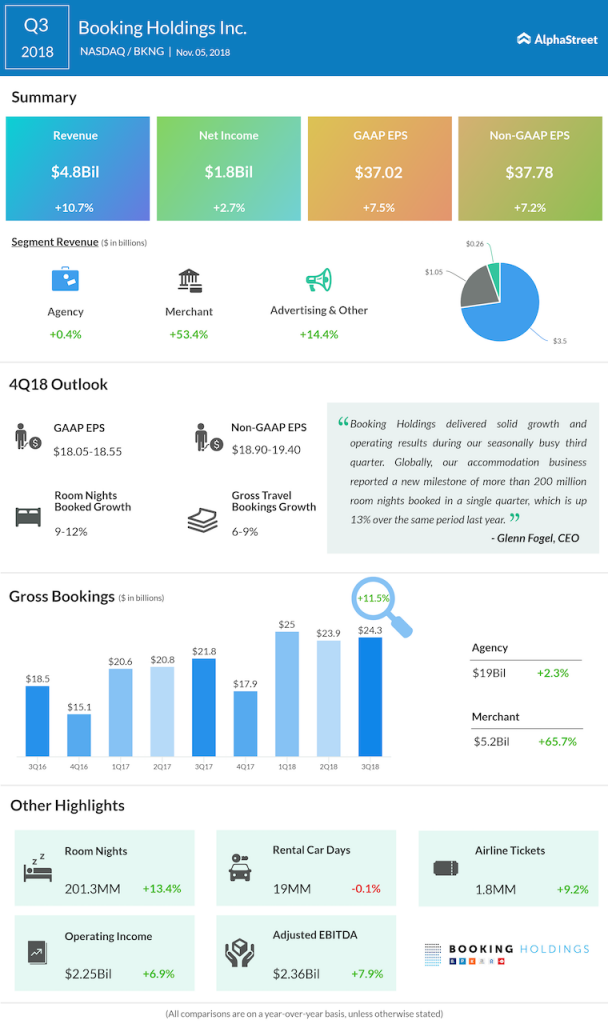 Shortly after the results were announced, the stock soared over 8% during after-market trading.

With Merchant revenues pushing the results up the last time around, investors would be looking at how Booking Holdings would capitalize on the changing travel industry, with a heightened focus on its international market.