Booking Holdings (BKNG) reported better-than-expected second quarter results before the opening bell.  The company, which was supposed to post its results on Wednesday, rescheduled to Thursday as certain business metrics were to be re-confirmed before the release. Shares of the company plunged nearly 8% post the announcement due to weak earnings outlook provided for the third quarter.

Gross bookings, a key metric to look for, jumped 15% growth touching $23.9 billion due to solid growth from the Merchant side. Revenue for the online travel portal grew 20% to $3.5 billion aided by strong growth from the merchant and advertising sales. Adjusted earnings came in at $20.67 per share, up 36% compared to last year, topping Street estimates.

Agency division which brings in the lion’s share of revenue increased 10% in the quarter, while Merchant and Advertising segments grew double-digits at 42.5% and 34.5% respectively. Adjusted EBITDA saw 35% growth in the quarter touching $1.3 billion. 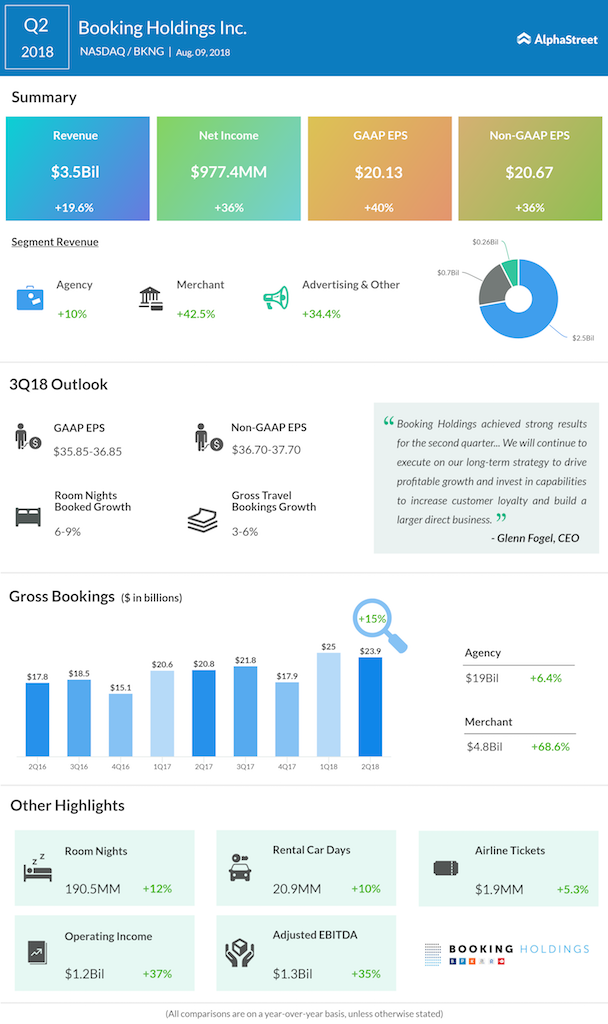 Booking has been investing heavily to augment its service offerings to compete with rivals to offer top-notch service to its users and reduce friction in their travel plans. To beef up its end-to-end service offerings, it gobbled up FareHarbor earlier this year making its foray into the local events reservation space. The company wants to be a one-stop shop for travelers and offers travel, food, accommodation and events booking services when they globetrot, making the life more comfortable for its users, which is expected to bode well for the firm in the near future.

Earlier this week, the company announced Manchester, the UK as its global hub for Rentalcars.com brand. It plans to invest £100 million over the next decade in the facility creating 200 new jobs. The Manchester facility is expected to open in 2020 which will be the global headquarters for Rentalcars division handling end-to-end operations.

Last month, Booking invested $500 million in Chinese ride-hailing giant Didi Chuxing, which would help its users to book cabs when they are traveling. On the flip side, Didi would provide its users to book rooms through Booking’s portal and apps, which is expected to augur well for both the companies because of its complementary service offerings.

On the third quarter outlook, Booking expects its adjusted earnings to be in the range of $36.70 to $37.70 per share, which is below analyst estimates. Revenue is expected to grow 6% to 9% based on the new revenue standard.

On the metrics front, gross travel bookings are projected to grow between 3% and 6% and room nights booked are expected to be up 6% to 9%. The company’s stock has increased nearly 18% in 2018.