The leading cloud service providers have one thing in common – in most cases cloud is not their core business, but it continues to drive revenue growth. Touted as the latest revolution in the IT industry, cloud computing is forecast to generate $163 billion in annual revenues by 2022.

Reflecting the widespread adoption of cloud services by the corporate world, the market share of all leading service providers in the US increased significantly last year, though at a slightly slower pace than in the preceding year. The combined market share of the top five players in the sector jumped to more than 50% last year.

Meanwhile, overall spending on cloud service adoption almost matched the prior year’s record highs, indicating further robust growth in the current year and beyond. According to experts, the sector will witness a marked decline in costs in the next couple of years amidst mounting competition, redefining the future of the global IT industry.

Relatively smaller enterprises are also being lured by public cloud services, mainly owing to the scope for cutting infrastructure costs and the consumption-based billing option that reduces costs further. Though public cloud services do not promise the kind of security and efficiency offered by private clouds – which mainly serves large companies and governments – they are highly cost-effective.

To a large extent, the bullish outlook for cloud service business is attributable to the fast-paced emergence of IaaS and PaaS into a mainstream service, at par with SaaS, in recent years. Moreover, it is expected that if IaaS continues to grow at the current rate for the next three years, that segment will overtake SaaS in the foreseeable future. 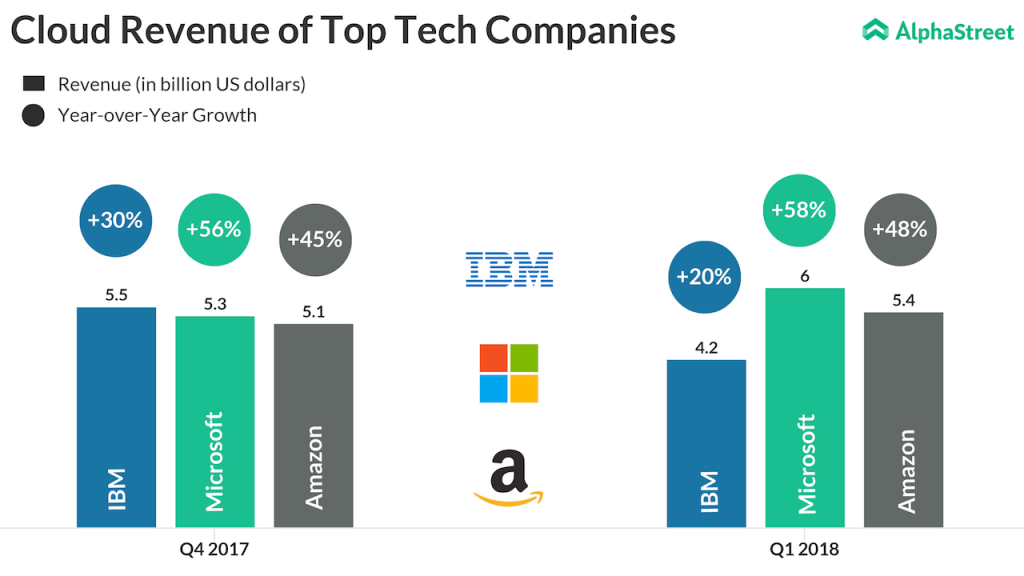 In the recently ended fiscal quarter, all the leading companies faced stiff competition from their rivals. Azure’s market-leading products and improved performance globally helped it retain the top spot in the first quarter ended March 31, when its cloud revenues soared 58% to $6 billion. The sharp increase widened the gap between Azure and Amazon, compared to the preceding quarter, and restricted the latter to the second position.

Amazon Web Service had posted a 48% increase in revenues to $5.4 billion during the first quarter. Meanwhile, the broader trend shows Amazon will maintain its supremacy in the public cloud market in the next few years.

IBM Cloud was in for a major shock in the first quarter, when it lost out to both Azure and Amazon and settled for the third position with $4.2 billion of revenue, which was up 20% year-over-year. The most recent results are a big climb-down for the company which had topped the list in the fourth quarter by recording the highest revenue of $5.5 billion. Considering the seasonal factors typically associated with IBM’s cloud business, which caused the first quarter downturn, the company could be a top contender for the first place in the coming quarters.

The market share of all leading service providers increased  last year, though at a slightly slower pace than in the preceding year

A statement from Alphabet (GOOGL), which usually does not provide revenue figures for the cloud business, earlier this year said Google Cloud Platform generates revenue of around $1 billion every quarter. The fact that G Suite, comprising Google Docs, Google Sheets and Gmail, is the most widely used cloud-based productivity tool brightens Google’s prospects in the cloud market.

Among others, Salesforce (CRM) and Adobe (ADBE) reported better-than-expected financial results for their most recent quarter, when revenue growth was driven primarily by their respective cloud service arms.

Now, does the rapid migration to public cloud mean that in the long run, every business will have their IT operations managed by tech centers located elsewhere? In fact, there are widespread apprehensions about security, which holds back several large companies from adopting the cloud-based model.

Naturally, the primary concern is the security of data uploaded to the cloud. The recent incidents of data exposure involving third-party database management systems have added to the fear that information saved in the cloud platform could fall into the wrong hands. Worryingly, in some cases, simple misconfigurations resulted in the exposure of highly sensitive data. But this will not slow down the companies switching over to cloud platform.