Can a trade war wound Alibaba?

As Alibaba Group (BABA) reported earnings on Thursday, it displayed amazing resilience to the ongoing trade war between the US and China, reporting 61% growth in revenue.

On the same day, the Trump administration escalated its spat with China by introducing a further 25% tariff on about 16 billion of Chinese imports including motorcycles, antennas and chemical products. China retaliated immediately with 25% tariffs on an equal share of American products.

And this has created a dilemma in quite a few investors – how long can Alibaba stay strong in the face of escalating tensions? The dilemma was visible in the trading patterns on Thursday. While the stock gained as much as 4% immediately following the solid results, it closed down over 3% as investors remained cautious of the macroeconomic and geopolitical concerns.

During Thursday’s conference call, Alibaba executives reiterated their confidence of tiding over the trade tensions, something they have been repeating for the past few quarters. In fact, the Chinese retail giant is transitioning itself from a normal e-commerce platform to one that helps US companies sell products to the Chinese audience.

While the trade war may put some pressure on US firms that sell through Alibaba, the Chinese audience still has the option to depend on cheaper local products.

Also see: How the cloud industry took shape in the second quarter

Meanwhile, it may be noted that the Chinese audience has a long-time attraction towards high-quality American food products. For the same, Alibaba had recently inked partnerships with Kroger (KR) and Starbucks (SBUX), under which, Kroger set up its store through Alibaba’s Tmall, and Starbucks is selling coffee through the Ele.me platform.

Yet, to tackle any trade barriers that may arise in the future with the US, the company has been actively looking for similar alternative export markets, including Australia and Canada. In the retrospect, the company probably is, as its executives claim, invulnerable to the trade situation.

Then we have another promising unit – the cloud operations – which has been consistently seeing above 90% growth. The cloud service is only the fourth largest, following Amazon Web Service, Microsoft Azure and Google Cloud, and has the potential to drive topline in case of retail stagnation.

At least one market observer has expressed confidence in seeing 20% upside to Alibaba stock.

Zacks Investment Research chief equity strategist John Blank told CNBC, “What you’ve got to understand about Alibaba is that people are casting it as an Amazon, and it’s not an Amazon. It’s an Amazon and a PayPal and … an eBay. That’s a strong business model, probably lighter than Amazon and probably able to deliver that $250 in 2019.” 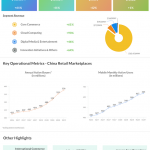