Shares of CarMax (KMX) nosedived Wednesday after the used car retailer reported fourth-quarter earnings and revenues that missed analysts’ expectations. While the downtrend in the used vehicle division continues to drag the top line, the company announced plans to add more stores next year and beyond.

Fourth-quarter profit sagged 17% annually to $0.67 per share, contrary to expectations for an increase. The bottom-line was negatively impacted by a one-time charge related to the recent income tax reform.

Net sales and operating revenues increased modestly to $4.1 billion as a marked growth in wholesale unit sales more than compensated a decline in used unit sales. However, total revenues came in below Street forecast. 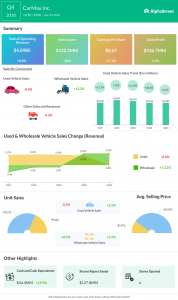 Comparable store sales in the used vehicle unit dropped 8% in the recently ended quarter hurt by softer traffic and relatively flat conversion, besides seasonal factors. Of late, the used car division has been feeling the heat from the cost escalation triggered by higher interest rates and too many off-lease cars hitting the market.

The company, which operates in the Car Sales and Auto Finance segments, opened four new stores during the fourth quarter. As part of expanding the store presence, 15 new stores will be opened next year and 13-16 stores in fiscal 2020.

The company also repurchased 1.9 million shares for $127.8 million. It is expected that higher investments in infrastructure would push up capital expenditures to about $340 million in fiscal 2019.

Among CarMax’s competitors, AutoNation (AN) is scheduled to announce financial results for its more recent quarter on May 3.

CarMax shares fell more than 3% when the market opened today, denting expectations for an increase. A potential depletion in market value would add to the woes of CarMax which recently got embroiled in a series of lawsuits over the safety of the vehicles it sold.