Earth-moving giant Caterpillar Inc. (CAT) posted better than expected first quarter results driven by a combination of strength in many end-markets and firm cost control. Inspired by the upbeat results and increasing demand for products and services, the company raised its earnings outlook for fiscal 2018. Following the announcement, shares of the company rose 3.29% in the early trade.

With sales and revenue climbing 31% to $12.86 billion, Caterpillar saw its first-quarter earnings grow more than eight times (a 767% surge) to $1.67 billion or $2.74 per share. Last year was hurt by restructuring costs of $723 million related to the closure of the facility in Gosselies, Belgium. Adjusted EPS soared 120% to $2.82.

Revenue benefited from improved end-user volume demand across all regions and most end markets as well as favorable changes in dealer inventories, which is reflective of current end-user demand. The largest sales bump was in North America, which improved 33% as strong economic conditions in key end markets drove higher end-user demand. The impact of a more significant increase in dealer inventories too contributed to the increase in North America.

The company increased global full-time employment by about 4,400 positions to about 99,700 at the end of the quarter, from last year. This was due to a rise in production employment primarily to support higher volumes. The flexible workforce rose by about 6,500, also primarily due to higher production volumes.

For construction industries, the company expects broad-based growth in all regions in 2018, with the most significant drivers being the continued strength for construction activity in North America and infrastructure development in China.

The company expects strong global demand for commodities to be a positive for heavy construction and quarry and aggregate customers. Sales of oil and gas applications are expected to rise in 2018, led by continued strong demand for reciprocating engines for well servicing and gas compression applications in North America. The company sees a rise in transportation sales primarily from rail services growth.

Caterpillar expects higher volume across the three primary segments. Improved price realization is predicted to be partially offset by material cost increases primarily driven by higher commodity prices. The outlook assumed continued global economic growth. Any potential impacts from future geopolitical risks and increased trade restrictions have not been included in the outlook. 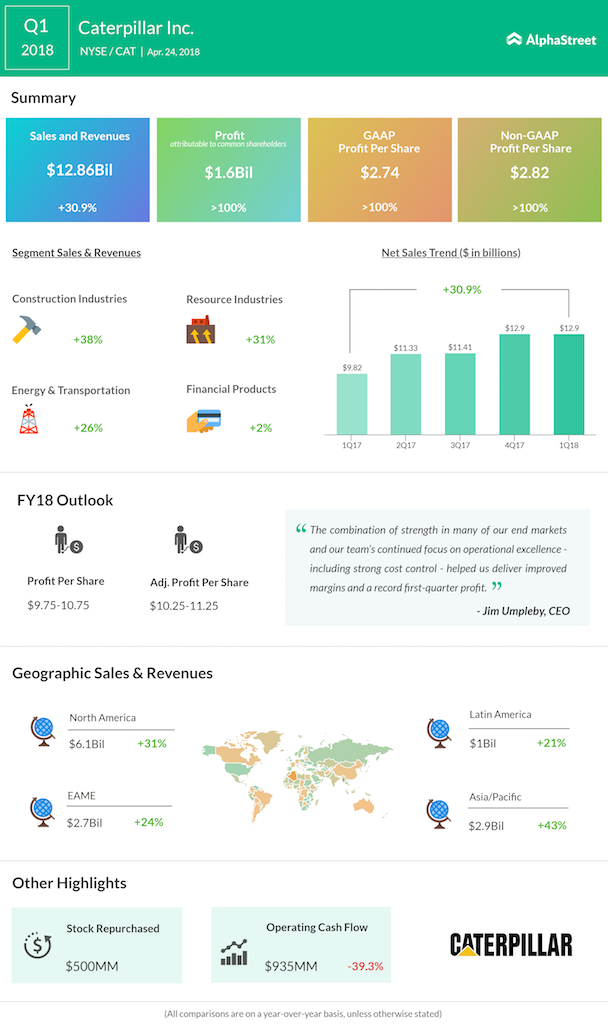