Just a couple of days after the CBS board ordered an investigation against the CEO Les Moonves, the company reported better-than-expected second quarter results after the bell. The mass media firm reported 6% jump in revenues to $3.47 billion due to broad-based growth recorded on all revenue streams. Earnings came in at $1.12 per share, up 8% mainly due to lower tax rates post the tax reforms compared to last year. 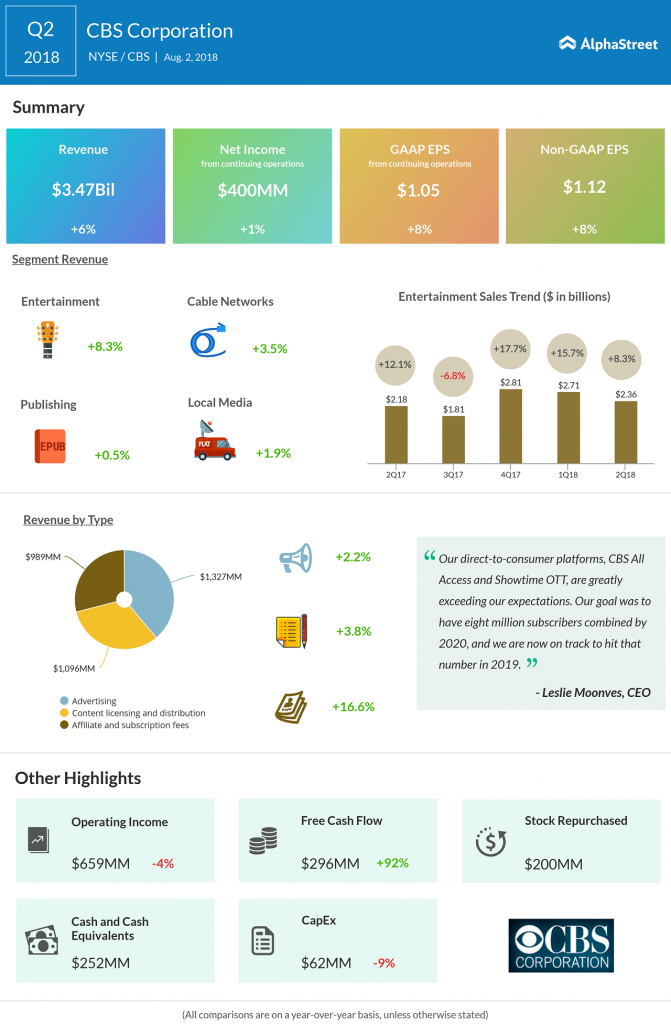 CBS’ digital offerings seem to be bearing fruit growing 70% led by continuous growth from CBS All Access and Showtime OTT offerings. Thanks to stellar subscriber growth for its OTT services, CBS now expects to touch the 8 million user base in 2019, one year earlier than the previous forecast of 2020 and expects to double the user base to 16 million by 2022, which would augur well for the company amidst intense competition from its rivals.

Last Friday, New Yorker came up with a report which stated that six female employees of CBS alleged that Moonves engaged in sexual misconduct with them. As the news went viral, the Board decided to launch an investigation against the complaints, but for now not taking any action against Moonves. Investors didn’t take the issue lightly sending the stock down 5% on Monday continuing the losing streak that began last week.

As a follow-up to the probe, the board appointed law firms Covington & Burling and Debevoise & Plimpton to look into the issue, led by Nancy Kestenbaum and Mary Jo White, respectively.

The ongoing probe outcome will decide on the fate of Moonves who has been associated with the firm for more than two decades. On the flip side, National Amusements head Shari Redstone will be closely watching the outcome as it would give a headroom to push for the CBS-Viacom merger.

It’s been raining deals in the media industry and consolidation seems to be the order of the day. In June, telecom major AT&T (T) gobbled up Time Warner for $85 billion and the $71 billion Disney-Fox deal has been approved by the shareholders of both firms last week.

The consolidation in the industry seems to be inevitable to take on nimble new-age streaming providers like Netflix (NFLX), Amazon (AMZN), and Hulu. With the changing consumer landscape and viewing habits shifting towards online, cord cutting has hurt the traditional cable providers, pushing them to look for other avenues to stay afloat and tackle competition.

The stock price of CBS has dwindled nearly 19% over the last 12 months and lost more than 10% year-to-date.