Chesapeake Energy (CHK) slipped to a loss in the second quarter from a profit last year, due to lower revenue from oil, natural gas, and NGL as well as an increase in expenses from marketing and depreciation, depletion and amortization. The top line marginally missed consensus, while the bottom line barely managed to come in line with analysts’ expectations. The company’s shares fell about 6% in the premarket session.

Production expenses fell to $2.85 per barrels of oil equivalent (boe) from $2.92 per boe a year earlier, as a result of certain 2018 and 2017 divestitures partially offset by higher saltwater disposal costs. General and administrative expenses rose to $1.89 per boe from $1.45 per boe in last year, driven by stock-based compensation awards.

The Oklahoma-based oil producer’s average production rose 8% to 530,000 boe per day, and the count of gross wells supplying to the market rose 2%. Average oil production for the quarter was about 90,000 barrels of oil per day, spiking 11% year-over-year adjusted for asset sales.

Chesapeake’s average realized oil price jumped 11% to $57.16 per barrel in the quarter, while its natural gas price declined 2.6% to $2.64 per thousand cubic feet (Mcf). The company expects to see continued meaningful improvements in growing its cash flow as total oil production, adjusted for asset sales, moves higher throughout the rest of 2018 and into 2019.

Chesapeake recently agreed to sell its interests in the Utica Shale operating area located in Ohio for about $2 billion, plus the right to receive an additional $100 million in consideration based on future natural gas prices, to Encino Acquisition Partners. The transaction is expected to close in the fourth quarter of 2018.

Shares of Chesapeake ended Tuesday’s regular trading session up 1.07% at $4.72 on the NYSE. The stock has been trading up 19% for the year-to-date, while it dropped 4.8% over the past year. 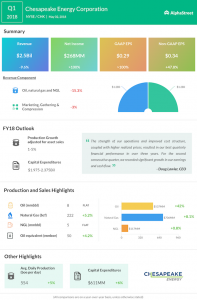