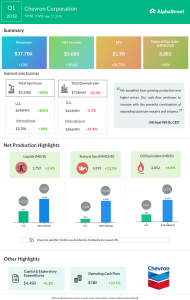 Total upstream earnings more than doubled to $3.4 billion during the three-month period. Meanwhile, lower margins had a negative impact on downstream earnings, which dropped 21% to $728 million.

Driving the impressive quarterly performance, worldwide net oil-equivalent production advanced 6.3% to 2.85 million barrels per day, with significant contributions from the U.S. operations. The upturn indicates that the measures adopted by Chevron to ramp up production, especially that of LNG and Shale, over the past quarters have started yielding results.

“Our cash flow continues to increase with the powerful combination of expanding upstream margins and volumes. Oil and gas production is increasing, most notably in our Gorgon and Wheatstone LNG Projects in Australia, and our shale developments in the Permian Basin where production grew 65 percent from a year ago,” said Chevron CEO Michael Wirth.

Meanwhile, Exxon Mobile (XOM), the largest oil company in the U.S., posted lower-than-expected earnings for the first quarter, hurt by a fall in refining and chemicals profit. The results triggered a selloff and the stock lost nearly 4% in the early hours of trading.