The corporate and investment banking division of Citigroup (C) will soon cease to exist as an independent unit. According to sources, the bank is planning to merge the division with its capital markets origination business as part of the ongoing restructuring. The combined entity will be named ‘Banking, capital markets and advisory’.

The initiative is expected to generate additional revenues for the bank by boosting wallet share, while also helping it expand market share in the lucrative investment banking sector. The division, which continues to be the firm’s key revenue driver, has been witnessing softness in the recent quarters. The new model adopted by Citi for its core business is already being followed by rivals JP Morgan (JPM) and Goldman Sachs (GS).

The restructuring will also include significant changes to the leadership team. Corporate and investment banking head Ray McGuire will take the reins of the new unit, which will have Manolo Falco and Tyler Dickson as global co-heads. McGuire will also assume the role of the group’s vice-chairman.

Ray McGuire will lead the new unit, which will have Manolo Falco and Tyler Dickson as global co-heads

The other executive changes announced by the bank recently include the departure of Jim Cowles as CEO of EMEA operations and Bill Mills as CEO of North American operations. Earlier, cards and consumer services chief Jud Linville left the company.

The New York-based bank has been exploring ways to regain the lost strength, with focus on scrapping its many secondary businesses and scaling back assets worth several million dollars. Recently, Citi rejigged its sprawling consumer banking business in the US by combining the credit-card business and wealth and retail units.

Of late, bank stocks have been under pressure from muted yield and softness in lending. Citigroup shares dropped about 4% since the beginning of the year, after reaching a post-recession peak in January. The stock traded lower in the early trading hours Thursday. 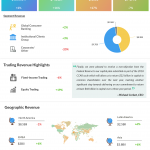