Investigations carried out by federal agencies showed that hackers exploited seemingly minor flaws in the electronic voting system to manipulate the vote tally in the last presidential election. The findings might not surprise Americans as much as it would have done a few years ago, because now we know a bigger threat is hanging over the election process.

Skeletons of the illegal online campaign launched by Russian agencies a couple of years ago to rig the presidential election are still tumbling out of the closets of technology companies like Facebook (FB) and Google (GOOG). With the midterm polls around the corner, the security agencies are busy plugging all the loopholes in the system to ensure a free and fair election.

That the attackers managed to hack important government websites and breached huge volumes of voter data show the severity of the campaign, and that justifies the extra alert this time. Reports show that hackers, with possible Russia connections, are already doing the groundwork to interfere in the November election.

The litigation involving Facebook and the now-defunct Cambridge Analytica, a UK-based data mining company that allegedly transferred details of Facebook users to Russian agencies, has exposed some startling facts with regard to misuse of personal information on the cyberspace. After being fined by the EU regulators for multiple lawsuits including the Russia-sponsored data breach, Facebook and other tech firms have vowed to stop malicious propaganda on their platforms and ensure data security.

Google was hit with a whopping $5-billion fine recently for monopolizing the market by coaxing smartphone makers into using its Android operating system. While Facebook escaped with a relatively lesser fine in the Cambridge Analytica case, it is facing a heavy penalty in Belgium for using information shared by account holders for commercial purposes. Earlier, Yahoo was slapped with a $35-million fine for hiding a massive data leak from users. 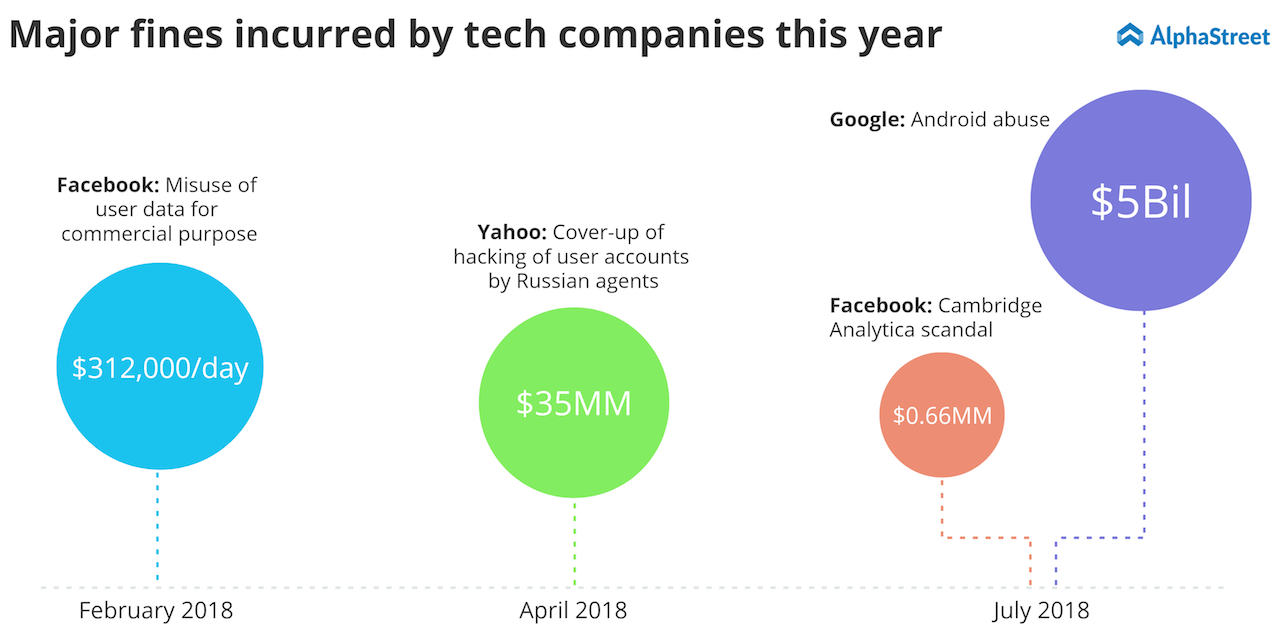 Meanwhile, the lawsuits are taking a toll on the market value of the companies. Going forward, their stocks could be hit harder when the proceedings in the remaining cases are completed, possibly with more penalties.

Senior executives who represented Facebook and Twitter at a meeting called by the Senate recently faced some tough questions from the members. While briefing the corrective measures being adopted for safeguarding sensitive information, the executives admitted their platforms were misused for spreading fake news, propaganda, hate speech, misinformation and discriminatory advertising.

Sensing the potential danger in giving internet companies a free hand, the regulators are currently focusing on preventive measures. Earlier this month, the European Commission asked Facebook and Twitter to take steps to remove extremists post within one hour of publishing, and warned of legal action if they fail to do so.

Facebook shares have underperformed the market so far this year. Ironically, the stock reached a record high in July but suffered the biggest ever intraday loss the very next day following dismal quarterly results, draining about $120 million of the company’s market value.