Shares of Comcast (CMCSA) rose 4% after it reported a stronger-than-expected earnings growth in its second quarter, boosted by the rapid growth in its broadband business. Earnings during the quarter soared 33% to $0.69 a share. Excluding items, the company’s earnings surged 25% to $0.65 a share that crashed analysts’ estimate of $0.60 per share.

The NBC-owned company that recently abandoned its pursuit of 21st Century Fox (FOX), reported revenues of $21.7 billion, up 2.1%, that missed Street’s view of $21.86 billion.

Comcast continues to feel the wrath of over-the-top (OTT) platforms as its cable television subscribers continue to ditch Comcast in a faster pace than expected. During the quarter, nearly 140,000 customers abandoned the company’s video platform, up from 34,000 in Q2 2017. Despite the loss in subscribers, the company compensated it with a huge jump in its high-speed internet customers that topped the consensus estimate of 195,000 forecast. There was a net increase of 260,000 in high-speed internet customers. 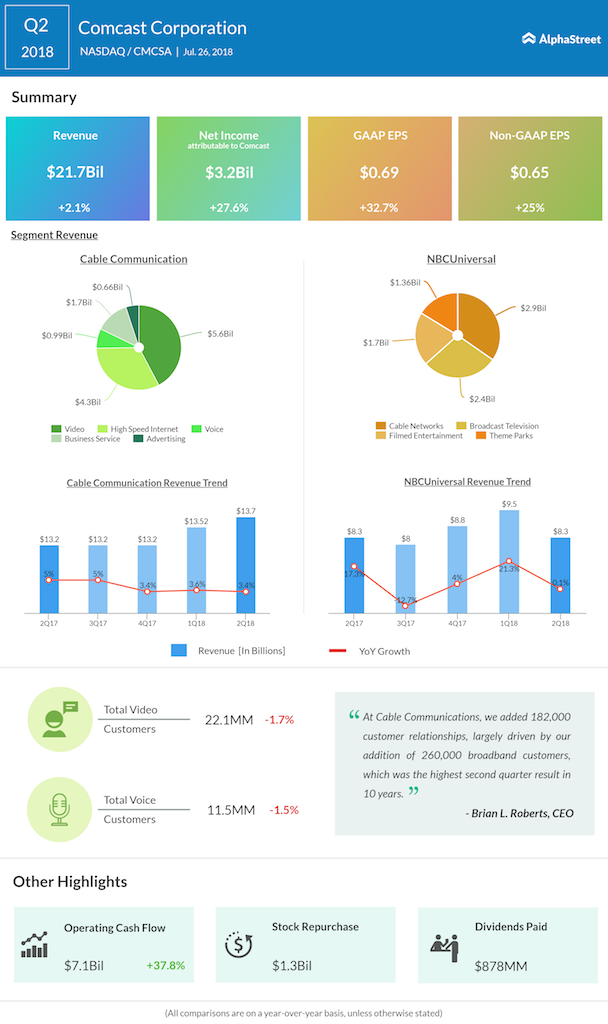 “We delivered fantastic results in the second quarter, including robust free cash flow of $4.3 billion. At Cable Communications, we added 182,000 customer relationships, largely driven by our addition of 260,000 broadband customers, which was the highest second quarter result in 10 years,” said CEO Brian Roberts.

Comcast let go of Fox and focused on its other potential acquisition, pay TV operator Sky. This deal would expand Comcast’s presence beyond the US. The path to ownership of Sky assets is not easy as Comcast will have to fight with Fox that offered to pay $32.5 billion for Sky. This prompted Comcast to immediately raise its bid to $34 billion thereby becoming the top bidder.

A look into Sky’s recent performance clearly shows why Comcast is compelled to own Sky. In the year ended June 30, the European broadcaster, which remains at the center of a takeover battle, added about half a million new direct subscribers. The company’s sales rose 5% to $18 billion.

Shares of Comcast have dropped around 13% in the year-to-date period and about 12% in the past 52-weeks.